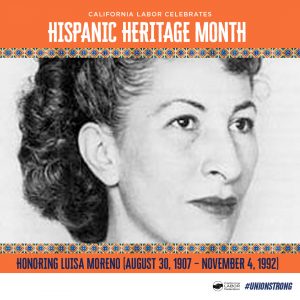 In celebration of Hispanic Heritage Month, we honor the Latino unionists who have been monumental figures in progressing workers’ rights. Among them was Luisa Moreno, a Guatemalan-born organizer and activist who would later become one of the most impactful labor leaders of the 20th century.

Luisa Moreno was born on August 30, 1906 in Guatemala and raised in Oakland, until her teenage years. Her first brush of activism came when she moved back to Guatemala, where she was unable to receive a higher education because she was a woman. Frustrated with the patriarchy, Moreno organized a group to lobby for female students to attend college. At 20, Moreno’s interest in social issues led her to become a reporter in Mexico City, looking for stories that would impact the world. But it wasn’t until she moved to New York City at 28 and worked as a seamstress in a garment factory, that she became a powerhouse in the labor movement.

Moreno was outraged by the garment industry’s blatant exploitation, low wages, and dangerous working conditions. She tapped into her anger and joined a group of Latino labor activists, focusing on workplace reform and women’s rights. Moreno had participated in several garment strikes before she was hired as a professional organizer by the AFL to help organize underpaid workers in Florida tobacco fields. She then joined the Unified Cannery, Agricultural, Packing, and Allied Workers of America (UCAPAWA), an affiliate of the CIO, where she focused on organizing canneries and other similar industries. Being bilingual, Moreno played a pivotal role in organizing the Spanish speaking workers in Southern California at food processing plants. She also wrote pamphlets, organized strikes, and encouraged participation in unions. Her fierce dedication and talents were widely recognized by the labor movement and Moreno became both the first woman and first person of Latin descent appointed to the CIO council.

Moreno, like many other labor leaders of color, was deeply involved in the civil rights movement. Infuriated by the rampant racial discrimination and segregation across the U.S., Luisa became a champion for Latino civil rights. In 1947, she helped establish a defense committee to fight the unlawful arrest of Mexican Americans in Los Angeles who were falsely accused of murder. Sadly, Moreno was forced to retire from her activism and flee the U.S. because of her ties to the communist party during the second red scare. She died in her home country on November 4, 1992, leaving behind an incredible legacy for future activists everywhere.

Moreno may not be well-known in mainstream history, but it was her activism that paved the way for organizations like the United Farm Workers. Moreno’s persistence and devotion to the labor movement made it possible for both Latinos and women to have a stronger voice. We honor Luisa Moreno by continuing to fight for immigrant and civil rights, while striving for a more just, inclusive and equitable labor movement.