In April of last year, 24-year-old Nina Dang broke her arm as the result of a bicycle crash in San Francisco. She was taken by ambulance to Zuckerberg General Hospital. She received treatment and was later released to recuperate at home. Pretty routine, right? Unfortunately, the story of Nina’s mishap on her bike didn’t end […]

Most working people experience extreme financial hardship at one time or another. It’s the sad reality of an economy that prioritizes wealth-hording by the super rich over the basic needs of everyday people. Compounding the problem of so many of us living paycheck-to-paycheck is the largely unregulated market for high-interest loans. These modern-day loan sharks […]

Engineers at Douglas Emmett properties in Los Angeles make the city work. They voted to stand together in a union so they’d have a voice. A voice for better pay. A voice for safety on the job. A seat at the table when the company makes decisions that affect workers and their families. But Douglas […]

“We are making a promise to our nation and each other to win the dream Dr. King died for….We are the American labor movement, the people who built this country into the most prosperous nation the world has ever known. And we ain’t done yet.” 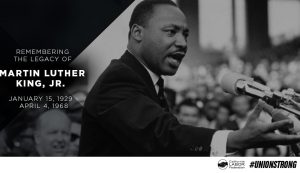