Today women from various industries and backgrounds gathered in Sacramento to engage in an open and honest discussion on an equitable future for all women, starting with putting an end to rampant sexual harassment women endure in the workplace.

The California Labor Federation and the Consumer Attorneys of California sponsored Making Equity a Reality for Women in California,” an all-star panel discussion on female empowerment, solidarity, and organizing in the workplace to further the goals of social movements like #MeToo and #TimesUp so that they work for all working women. They consisted of activist and actress Jane Fonda, TIME “silence breaker” Juana Melara, documentary filmmaker Jennifer Newsom, SAG-AFTRA President Gabrielle Carteris and ROC United’s Evelyn Rangel-Medina. Together, these women tackled the hardships of power imbalance, wage theft and income inequality. But the unfortunate reality is sexual harassment in the workplace continues to be a dominant issue for women, especially in low-wage industries.

Silence breaker Juana Melara spoke about the sexual intimidation she endured in the workplace, which is extremely prevalent among female workers in the hotel industry, and how her union became her saving grace:

“It’s hard when you don’t have a voice in your workplace.  If it wasn’t for them, (UNITEHERE! 11) I wouldn’t be here. I’d still be struggling day to day without any power.”

Too many times, more often than not, vulnerable workers are subjected to workplace abuse and even coerced into signing arbitration agreements, which strip away a worker’s ability to fight against wage theft, sexual harassment, and other workers’ rights violations in court. It’s no wonder why all the panelists advocated for legislators to support AB 3080 (Gonzalez Fletcher), a bill protecting workers by ensuring no one is forced to sign away their rights on the job.

“AB 3080 will give access to workers, especially low wage workers, access to the public courts…it provides a choice for ALL workers.”

In the wake of the #MeToo movement, AB 3080 is a necessary bill for California in order to protect vulnerable workers, especially women and people of color. As more workers come forward with their stories of injustice and abuse, it is up to California to pave the way in curbing sexual assault and holding employers accountable.

“We are fighting now for the structural change that can make systemic change…I think we have to keep talking and fighting…Governor Jerry Brown needs to sign this legislation(AB 3080). This is the time! This is the moment to protect women.”

It’s time to end the attack on women and all workers that are subjected to sexual intimidation in the workplace. Working people must stand together to end forced arbitration and shift the power balance. AB 3080 is a step forward in putting an end to sexual harassment and demands accountability from corporate bosses.

Join the many workers’ standing together to end forced arbitration on the job! Take action to urge the California Legislature to pass this vital legislation! 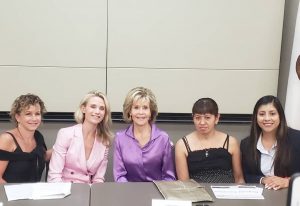