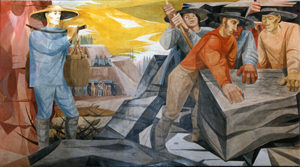 Despite the sustained struggle for passage of an eight-hour day law in the 1860s, and its achievement in a handful of trades where workers were well organized, its promise went unfulfilled in many industries due to the determined resistance of employers.

One spectacular instance of a strike for a shorter work day, and of its brutally efficient suppression by business owners, occurred beneath the surface of one of the most famous engineering feats in California history: carving a passage for the Central Pacific Railroad eastward across the Sierra Nevada mountains.

Railroad building was the great industrial project of the American 19th century.  It employed more people, expended more capital, pushed greater development of technology, and did more to unify the sprawling geography of the country than any other industry of its time.

It also made a great deal of money for a few men, who quickly became so rich that they changed the balance of power in the democratic republic.  The “railroad barons”—a branch of the broader nineteenth century ruling class group dubbed “the Robber Barons”—used their enormous wealth to live lives of unbelievable luxury, and also to control state legislatures and, ultimately, the United States Congress.  In California the picture was no different.

More than a century after the death of Leland Stanford, Charles Crocker, Collis Huntington and Mark Hopkins, their continuing presence in the state remains impressive.  Their names are still memorialized on cities, streets, banks, hotels, libraries, parks, beaches, schools, and universities. They had failed at gold mining, succeeded in retail businesses supplying miners, and converted their modest storekeeping fortunes into the seed money for the Central Pacific. Yet, how accurate is it to describe them, as standard histories do, as “the men who built the railroad” across the Sierras?

The actual work of building the railroad from Sacramento to Promontory Point, Utah, fell to more than ten thousand laborers and another couple thousand skilled craftsmen and supervisors.  The men who literally “built the railroad” were the ones employed by the “Big Four” to grade the roads, pack the embankments, dig and blast the passages through Sierra rock, build the winter snow sheds, and lay down the ties and the rails and hammer them together.

At the outset, Crocker, delegated by the other three capitalists to oversee the work in the field, had a labor problem. Fewer than half the workers whose passage to the railhead he paid stuck around to receive their first paycheck from him.  Most left immediately for the diggings across the state border in Nevada, where the Comstock Lode silver rush was in full swing.  These enterprising individuals were nearly all white.

With such turnover, the Central Pacific was making slow progress—just fifty miles in its first two years.  The railroad’s directors experienced great anxiety over the snail-like pace, because the United States government compensated them by the mile.  They were all too aware that the Union Pacific, working its way westward with steady infusions of Irish immigrant laborers, was making tracks at a much faster rate across the flat prairies of the Midwest.  When Central Pacific workers threatened to strike for higher wages, the Big Four considered their options. Child labor, like twelve year old Robert Gifford from nearby Dutch Flats, could perform some tasks.  He worked for three months leading a horse team and dump cart.  But this was no solution for the heavy labor, which comprised most of the work.

Before the close of the Civil War the Central Pacific’s owners proposed bringing thousands of Confederate prisoners, under military guard, to the tracks.  When the war ended, they talked about importing Mexican peasants, but discarded that idea in favor of another pushed by Crocker.

Supposedly inspired by the efficient work of his own personal servant, Ah Ling, Crocker brought in fifty Chinese workers as an experiment. They proved industrious beyond his expectations.  By the end of 1865 three thousand Chinese were employed by the Central Pacific; soon, close to ten thousand.  Crocker described their behavior approvingly:  “More prudent and economical, they are content with less wages.”  He actually paid them the same wages as white laborers—$30 per month—but the white men received room and board, and the Chinese set up their own camps and fed themselves. While some white workers grumbled about working alongside Chinese, most gained from the company’s decision, moving up to fill foremen, teamster, and blasting positions that paid more than the laborer jobs performed by the Chinese.

Crocker told his partners that there was “no danger of strikes among them.”  So happy was Crocker with his new workforce that he foolishly refused to try out the new steam-driven drill sent up the mountain by his partners to help bore the main shaft through the rock, the Summit Tunnel, nearly a mile long. He preferred to rely on the steadfast handiwork of his “pets,” as he liked to call the Chinese workers, which took thirteen months, including two of the most severe winters on record.  The Sierra passage was the last major railroad tunnel in the country to be cut by hand.

It came at a high cost.  The company estimated it at $23 million, a fantastic sum in the 1860s.  But the workers might have reckoned the price differently. A local newspaper ran a story on Christmas Day, 1866, detailing the deaths of a half dozen laborers in a snow slide, one of many such incidents.  The following winter, as reported two decades later by one of Crocker’s chief foremen to Congress, “The snow slides carried away our camps, and we lost a good many men in those slides; many of them we did not find until the next season when the snow melted.”

Even during the rest of the year, the engineering miracle of traversing the Sierras placed a tragic burden on the workforce that accomplished it. Blasting through the mountainsides with the unstable industrial explosives of the period, many lost their lives.  Avalanches killed others.  One particularly harrowing type of work involved lowering workers over the sides of sheer rock cliffs in woven baskets to drill slots, stuff the holes with dynamite, and light the fuse.  Coworkers had to pull them to the top before they were blown up along with the granite.  Not all made it back.

In June 1867, several thousand Chinese workers had had enough.  They went on strike near Cisco, proclaiming “Eight hours a day good for white men, all the same good for Chinamen.”  They wanted forty dollars a month, up from thirty.  The Central Pacific, perhaps unwilling to imagine its “pets” might think for themselves, told the newspapers that the strike must have been the result of agitation by Union Pacific representatives.  The company wanted to maintain the public impression that it treated its workers well, and that only external meddling might have induced the workers to take such drastic action. When the laborers refused a Central Pacific offer to raise their wages to thirty-five dollars, the company surrounded their camps with armed guards, choking off food supplies.  After a week, the workers were forced to return to their jobs with no improvements in hours or pay.  Nonetheless, an interesting event had occurred: the largest job action yet seen in California, and by a group of workers believed to be strike-proof.

The successful resolution of the struggle for the eight-hour day in California, as elsewhere in the country, would have to wait for decades until it was inscribed in federal law.  Until then, leisure remained mostly the playground of the rich and, to a lesser degree, the middle classes, with the working class on the outside looking in.

Read more about the history of Chinese laborers and their backbreaking role in building California’s railroads in From Mission to Microchip:  A History of the California Labor Movement, by Fred Glass, and published by the University of California Press.