This fourth installment of the California labor history series is excerpted from the newly released book, From Mission to Microchip: A History of the California Labor Movement by California Federation of Teachers Communications Director Fred Glass. Available for purchase via the University of California Press website. 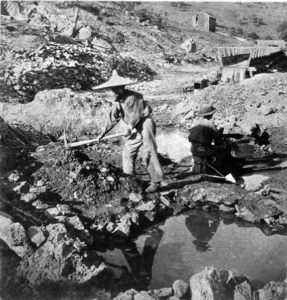 The Gold Rush created the glimmering origins of California’s industrial economy, its transportation systems, its premier urban center, and the first signs of organized labor—workers learning to represent themselves and their interests collectively to the rest of society.  Prior to the Gold Rush there was no labor movement, for there was no working class, no capitalist class, and no relationship binding them one to another, in a manner central to the state’s economy.  There was, in fact, no state, and comparatively little economy.  It was the farthest reaches of the American frontier.

James Marshall was a carpenter and millwright in the employ of John Sutter, overseeing construction of a sawmill on the south fork of the American River, a day’s ride by horse from present-day Sacramento, in January 1848.  As Marshall’s work crew was nearing completion of the sawmill, he caught sight of shining yellow flecks at the bottom of the millrace water channel.  Agitated, he rode to Sutter’s residence, where his boss confirmed the finding: gold.

Teamsters delivering goods to nearby Coloma spread the word. Throughout northern California, “the blacksmith dropped his hammer, the carpenter his plane, the mason his trowel, the baker his loaf, and the tapster his bottle.”  By mid-summer, four thousand new miners were standing in icy waters and mud while the sun baked their heads, swirling pans and rocking various sifting devices to filter gold from sand.

Four years later, a hundred thousand miners competed for the yellow mineral, across a swath of land in the mother lode country three hundred miles long by fifty miles wide.  In the earliest days most miners worked alone or in small groups.  The cost of entry to the “placer” (a deposit of minerals) diggings was the price of getting there plus a pick, shovel, and pan. The veins of gold in the earth were so plentiful, and so close to the surface in some places, that such primitive means were sufficient. The first miners averaged twenty dollars a day at a time when a skilled craftsman in the eastern United States made three dollars, and miners in Pennsylvania made a dollar or less.  From that moment to the present day, everything about California has been “golden.” The Gold Rush became the template for all California history.

Most Americans were not poor when they set out westward. It took at least $300 to make the trek, more than the average yearly income for workers and farmers. The price of travel made sure doctors, merchants, master craftsmen, lawyers and better-off farmers were well represented among the 49ers. A disproportionately high percentage of the American workers in the early diggings were sailors because they didn’t need to pay for passage. They simply abandoned ship when it reached San Francisco, leaving the vessels to rot in the harbor.

A number of emigres from Baja California and points south, on the other hand, were miners already—skilled, but poor—from Mexico, Chile and Peru.  Although many of the earliest Chinese travelers were merchants, nonetheless a high percentage of poor peasants came to Gaam San, the Golden Mountain.

Once in the mother lode, though, everyone was a miner.  Work was the great leveler, and difficult physical labor the daily reality for all. One miner wrote home, “You can scarcely form any conception of what a dirty business this gold digging is and of the mode of life which a miner is compelled to lead.  We all live more like brutes than humans.”

The Americans rapidly viewed the more skilled foreign workers as dangerous competitors.  As soon as California became the 31st state, the white miners persuaded the new state legislature to pass a Foreign Miners Tax, which charged non-citizens twenty dollars per month.  The tax persuaded thousands of non-natives to pack up for home.

By the mid-1850s, as surface gold sources wore out, workers incorporated more advanced forms of technology.  Hydraulic mining, using pressurized water to separate gold from dirt and rock, required capital for pumps, hoses, and flumes.  It transformed gold mining from individual prospecting with simple tools to groups of workers toiling for wages. Hydraulic mining had a tragic environmental impact, washing away entire mountainsides.

The most effective form of industrial mining was quartz or hard rock mining, which also employed the most workers by the 1860s.  In areas like Grass Valley and Nevada County, quartz mine companies hired miners by the hundreds to mine, mill, and smelt:  tunneling into the earth and bringing ore to the surface; crushing the ore with increasingly powerful stamping mills; and separating gold from quartz and other minerals through “amalgamation,” using acids and mercury—also called “quicksilver”—and heat to chemically remove the gold.

Quartz mining was dirty, dangerous work. Sanitation problems competed with chemical hazards from the amalgamation process and alcoholism as invisible occupational dangers.  The men were tough.  But no matter how tough, individuals couldn’t win against a badly placed stick of dynamite or working too long with mercury without proper ventilation.  Workers learned they needed each other for safety and the power to change these conditions.

By 1860 the daily take for a miner had plunged to a few dollars, due to competition and depleted gold. As John Hittel observed in the New York Daily Tribune, on December 27, 1858, “In 1851 labor pocketed all the profits of the mines; in 1858 capital pockets most of it.”

Few people got rich from mining gold. Those who became wealthy did so “mining the miners”:  supplying them with food, clothing, and equipment, employing them, and profiting from constructing a huge boomtown in San Francisco.  The Gold Rush threw dispossessed Indians and disappointed miners into an emerging capitalist economy.  As gold mining settled into something resembling one industry among others, overseen by a state government, the new state, like the rest of the United States, would have a large working class, a small capitalist class, and various middle classes in between.

To read Part 3 of the series, On a Mission:  The first California farmworkers click here

Read more about Californian miners and the Gold Rush in your very own copy of From Mission to Microchip: A History of the California Labor Movement, by Fred Glass here!