SB 546 is among the most comprehensive state statutes in the U.S. to require such disclosure in the large group health insurance market. The California Labor Federation, UNITE HERE, and the Teamsters sponsored the bill because many union trust funds and employers have been experiencing seemingly inexplicable and significant year-over-year rate increases in the market for employer-sponsored health insurance. Since 2002, health insurance premiums in California have increased 216% – almost six times the rate of inflation. 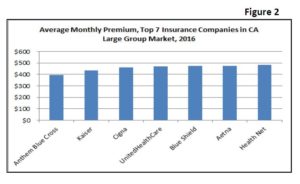 These average figures obscure the range of premium costs as workers experience them. A group’s rate may differ from the average because groups choose different products (e.g., HMO, PPO) and different amounts of coverage, and vary in group characteristics that are used to predict their health cost (e.g., age, geographic area, past health care costs). Insurers choose how to price the products, and decide on the type of coverage offered. Insurers and groups negotiate the premiums. 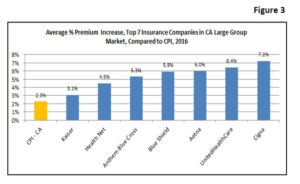 The average premium here is not the “self-only” or “single” rate. Rather, it reflects the total premiums collected by an HMO or insurer divided by the total number of covered lives. Employer plan sponsors choose the number and types of tiers (e.g., self-only, Employee+1, Family, etc.), and in some cases, the conversion into tiered rates. Actual premiums vary significantly and depend on a number of factors, including level of coverage; type of product (e.g., HMO vs. PPO); the group’s health risk experience; and the insurer’s method of rating the group.

Product type and amount of coverage (actuarial value): Premiums for the Top 7 companies were within a $90 range of each other, but reflect enrollment in different product types and different amounts of coverage. The most popular product types were: HMOs with 82% of all enrollment, followed by PPOs with 10%, and HDHPs (high deductible health plans) with 5%. (See Figure 4.) 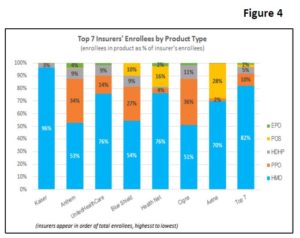 Actuarial Value (A.V.) measures the percentage of the health care costs that the insurer will pay on average – the remainder is the patients’ share. In this analysis, the actuarial value tiers in the filing were renamed with metal tiers as follows: 90-100% A.V. as Platinum; 80-89% A.V. as Gold; 70-79% as Silver; 60-69% as Bronze; and 0-59% as Tin. Kaiser had the highest percentage (94%) of enrollees with Platinum or Gold plans (the two highest levels of A.V.), while UnitedHealthcare had the lowest percentage (70%) on Gold or Platinum. (See Figure 5.) 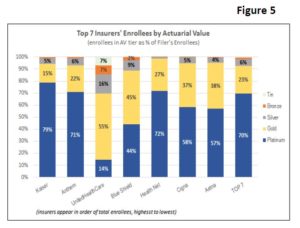 Premiums by product type and rating method: The product type with the highest average premium was Point of Service (POS) ($504 PMPM) and the lowest average premium was Exclusive Provider Organizations (EPO) ($272 PMPM), excluding consideration of indemnity and “other” products, which had very few enrollees (289 enrollees total). Only 3% of all enrollees are in EPO or POS plans. POS and EPO plans combine features of an HMO and a PPO. POS plans typically let enrollees use out-of-network providers, but require referrals to see specialists. EPO plans typically offer a narrowed network of providers, but do not require referrals. 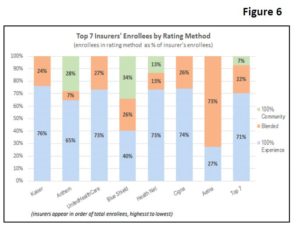 Experience-rating refers to the practice of charging customers premiums based on their own past history (“experience”) of health care costs. In experience-rating, groups with lower health risk are typically charged less than higher risk groups, all else being equal. In community-rating, a set of groups is charged the same premium without any variation for differences (such as age or health status) in each group’s characteristics. However, the SB 546 filings demonstrate that paying the same rate (i.e., community rating) does not necessarily mean paying a lower rate in comparison with the large group market averages or the average for experience-rated groups. 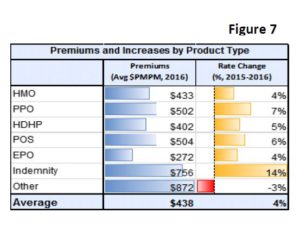 Insurers decide which rating method they will use for their large group customers. Filers did not explain, nor were they required to explain, why the average premiums differed. Based on the filings, it is not possible to conclude whether the mix of groups that are community-rated have higher health risk than those that are experience-rated, whether they chose plans with higher actuarial value, or whether the insurers used another metric to develop community-rating prices that were, on average, higher than experience-rating.

Cost drivers: Prescription drugs represent the fastest-growing category of spending by insurers. All 14 filings submitted by the Top 7 companies in the large group market reported prescription drug costs were expected to rise at a greater rate than overall medical costs in 2016 (see Figure 8). 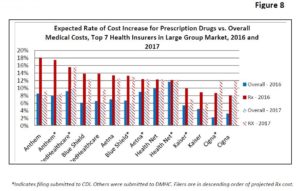 Highest total spending by medical category: Nine of the 11 filings submitted by the top insurers reported aggregate spending to be greatest for hospital services – inpatient, outpatient and capitated (institutional) combined. Apples to apples comparisons of spending on different medical benefit categories by insurers and HMOs are not entirely possible because different companies filled out the SB 546 filings differently. For example, some filers reported spending in just the two categories “Hospital Inpatient” and “Hospital Outpatient.” However, others also included spending for “Capitation (Institutional),” which also represents hospital services costs. In these cases, it’s not clear how much of the capitated spending refers to inpatient versus outpatient services. Five of these 11 filings reported that the benefit category on which they had spent the most was hospital inpatient services specifically.

Notably, Kaiser, which represents about half the covered lives in the state’s large group market, did not break spending detail down according to the various benefit categories listed in the SB 546 form (e.g., hospital inpatient, hospital outpatient, physician services, and seven other categories). Because Kaiser’s physicians and hospitals are part of two distinct organizations, Kaiser’s failure to differentiate between hospital and physician spending is baffling.

Price inflation greater than utilization: Of the ten relevant filings submitted by the top HMO and health insurance companies in California’s large group market, all revealed that projected price inflation would have a greater effect than utilization on the increasing cost of medical services in 2017 (see Figure 9). 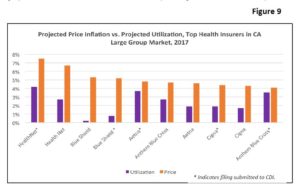 This finding is in keeping with a growing body of evidence that, contrary to the notion that Americans use too much health care, in fact, it is high prices that drive excessive health care spending in the U.S. For example, the cost of insulin – a 95 year old drug that has astonishingly remained without generic competition in the U.S. – quadrupled in the seven years between 2006 and 2013, increasing from $190.47 to $736.47 a year per patient. Moreover, while the Organisation for Economic Co-operation and Development (which comprises 35 of the most economically advanced countries in the world, as well as few emerging economies) annual average of doctor visits per capita is 6.8, in the U.S. that number is
just 4.

Profits from large group premiums: The Top 7 filers posted profits of over $9.5 billion in the large group market over the last five years (2011-2015). Profits increased 64% over that period. Each of the seven top companies posted profits each of the five years covered by the filings. Filers were not asked, nor did they disclose, profits on their 2016 premiums. (See Figures 10-12.)

Insurance premium pricing: Given that SB 546 does not provide for a prospective rate review process, filers were not required to disclose their base rates, but rather only asked to briefly describe the factors affecting the base rate and the actuarial basis and to note changes in the use of the factors, and the number of enrollee-months affected.

Filers noted whether a particular rating factor was used (the SB 546 form includes geographic region, age, industry and eight other factors), but did not provide the base rate or how it was developed, nor did they quantify how much a group would be charged for having certain characteristics. Commonly used factors that filers acknowledged using were: age and gender, geographic area, health status, industry, family tiers, covered benefits beyond basic health services, cost-sharing, rating method, and provider network. Employee share of premiums and occupation were generally not used. Only one filer reported a range and an average for its use of age, geographic, region, and industry (but not the numeric factor for each rating band), and the tiers and factors used for family composition.

Further disclosure from filers is needed to evaluate the appropriateness of their use of industry and gender in insurance pricing. For example, six of the top seven filers reported using industry as a factor, but none stated which industries were charged more or by how much. One filer wrote, “these factors recognize that some industries tend to experience higher claim levels due to greater risk of accident or due to riskier lifestyles of typical industry employees.” Without more information about how the rate was developed, we cannot assess whether this filer’s pricing for industry captures an independent effect that was not already accounted for in health status, or another factor, or workers’ compensation costs.

Five of the top seven filers reported age and gender affected their pricing. Without disclosure of the numeric factor and the data on which it was based, we cannot evaluate whether the differences groups are charged for age and gender are based on objective, valid, and up-to-date information. Without a full set of all the numeric factors used, we cannot evaluate the amount of variation in the premiums that is not attributable to an identifiable factor, and may have resulted from the variations in negotiations or at the discretion of the insurer or its sales agents. Moreover, our reading of the California law (Health & Safety Code 1365.5(b)) is that rating based on gender is not allowed. We have contacted the DMHC and are awaiting further guidance.

The first year of rate filings reviewed in this document provide a new level of detail about large group, fully-insured health insurance products, which was previously unavailable from any one source.

These disclosures enable monitoring of the insurers on the changes in premiums, rates of increases, cost projections that are used to set premiums, enrollment by product types and by the richness of benefits, and shares of premiums going towards paying for care and towards profits. Monitoring may discourage insurers from charging unreasonable rates, but a retrospective disclosure process does not give purchasers, workers, and policymakers a chance to review the construction of rates before they are set. However, the first year of filings suggest the need for the following recommended changes:

This report is a collaboration of the California Works Foundation, UNITE HERE and SEIU 1021 research staff.