During their marathon “Seniors Vote!” Townhall tour, the California Alliance for Retired Americans (CARA) stopped in Oakland to educate and engage nearly one hundred retirees and activists on the 2016 General Election.  The Alameda County Town Hall’s purpose was to invite educational discussion on why the senior vote is vital to the upcoming election, review 2016 California Ballot initiatives, hear from candidates running for regional offices, and promote ways retirees can take action and get involved in the coming election. 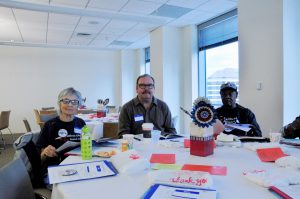 CARA President Nan Brasmer opened up the town hall and introduced keynote speaker and California Labor Federation Executive Secretary-Treasurer Art Pulaski to kick off the discussion. The recurring message in Pulaski’s speech was a reminder of the what’s at stake in the presidential election for retirees and all working people. His rousing speech emphasized the danger Donald Trump poses to seniors: “No presidential candidate in our lifetime represents a war of values between the income equality and excessive, gaudy wealth.” Lastly, Pulaski equipped the crowd with a reviving comment, stating “this fight is a fight over whether Americans will tip their toes into the waters of tyranny or whether we can expand and protect our democracy.”

The townhall also featured speaker panels on state initiatives, with advocates providing information on a number of propositions including: Margaret Shelled a on Proposition 51, Hene Kelly on Proposition 55, Tom Rankin on Proposition 59, and Pauline Brooks on Proposition 61. California Labor Federation’s former president and one of CARA’s vice presidents, Tom Rankin, spoke about Prop. 59, the measure to allow California elected officials to use their authority to work to overturn the Supreme Court decision in Citizen’s United v. Federal Election Commission, which gave corporations the right to spend unlimited amounts of money on elections. Rankin discussed the impact of the decision so far and how Proposition 59 could provide a path forward on campaign finance reform.

Advocates in the room had several questions for the panelists on issues affecting their daily lives, particularly prescription drug costs and affordable housing. During his comments, Pulaski acknowledged Big Pharma’s influence on any attempt to reform and curb soaring prescription drug prices, particularly this year with SB 1010 (Hernandez) but he emphasized: “There’s an antidote to Big Pharma, and that’s you. That’s CARA”. With housing, the crowd of retired union members raised personal concerns such as continuously rising housing costs, eviction, and their children and grandchildren having to move away from home in Alameda County.