Yesterday on the fourth anniversary of the first Fight for $15 national action, working people in 340 cities across the country took to the streets to demand justice for ALL. Calling out major corporations like McDonald’s and Uber as well as working conditions and low wages for workers at airports, working families and community brothers and sisters came together to fight for justice in low wage work. Their demand? $15 per hour minimum wage AND a union.

When bilingual education vanished from California classrooms in 1998, so did countless opportunities for generations of students.  Today, one in five California students is an English language learner and opportunities for multilingual speakers continue to flourish in the job market. It’s clearly time for a change.

Seven in ten University of California administrative and clerical workers, the majority working full time, struggle to put food on the table every month. You read that right – workers at one of the top university systems in the world often have to decide between paying their rent and buying food. According to a study released Monday by researchers at the Urban & Environmental Policy Institute of Occidental College (UEPI), more than two-thirds of UC workers are considered “food insecure” by federal standards. 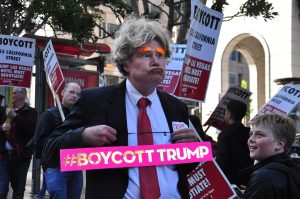 As Election Day approaches and voters across the nation watch Hillary Clinton and Donald Trump debate on a national stage, working people are standing together to call for a nationwide boycott of Trump’s businesses. The bold #BoycottTrump campaign calls attention to Trump’s poor treatment and disrespect of the very people who keep his businesses running every day.

During their marathon “Seniors Vote!” Townhall tour, the California Alliance for Retired Americans (CARA) stopped in Oakland to educate and engage nearly one hundred retirees and activists on the 2016 General Election.  The Alameda County Town Hall’s purpose was to invite educational discussion on why the senior vote is vital to the upcoming election, review 2016 California Ballot initiatives, hear from candidates running for regional offices, and promote ways retirees can take action and get involved in the coming election.

Last Friday night at the Regency Ballroom in San Francisco, working people, organizers, volunteers, eco-warriors, activists, and musicians all came together to Rock Against The TPP. The evening featured passionate speeches deriding the Trans-Pacific Partnership (TPP) and animated acts organized by Fight for the Future as part of a concert series nationwide (plus one for Canada) to campaign their revolution to prevent a the massive “NAFTA on Steroids”  trade agreement.