Silicon Valley’s inequality is well documented. While the region’s technology sector is booming, many working people have been left behind. But there’s a growing movement to change that, spurred by labor unions and the Silicon Valley Rising coalition. This week cafeteria workers at Facebook voted to stand together in a union, joining tech company shuttle bus drivers, janitors, security officers and others who have unionized in the last few years.

From the UNITE HERE press release:

This week, over 500 food service workers at Facebook won union representation at the tech giant’s campus in Menlo Park, CA. The workers, who are employed by contractor Flagship Facility Services, are calling for increased wages to compete with skyrocketing rents and more affordable health benefits.

“I grew up in East Palo Alto, but now I have to move to Tracy because I can’t afford to live here anymore, and that hurts,” said union leader Junior Sakalia, “One of my daughters got accepted into The Primary School in East Palo Alto, but now she can’t go because we have to leave. That’s why I am standing up for everyone in my community and for a Union, because I want to give hope to everybody who works for Flagship at Facebook. We deserve to be able to stay.”

There are approximately 5,000 food service workers in Silicon Valley—many of them immigrants and people of color—along with hundreds more in various tech hubs like Seattle, Austin, and New York City. Flagship cafeteria workers at Facebook are calling on the tech company to continue to be a leader in the industry in addressing inequality in the industry and the communities it impacts.

Enrique Fernandez, business manager of UNITE HERE Local 19, says “We are pleased that Facebook and Flagship have been cooperative partners in this organizing process. We look forward to sitting down to negotiate a contract that addresses some of the challenges workers are going through.”

Flagship workers will join cafeteria workers at Intel, Cisco Systems, Agilent and Nvidia, who are all currently members of UNITE HERE Local 19.

More evidence that when working people stand together, we can accomplish great things for our families and communities. We look forward to seeing more tech company workers standing together in the future to ensure that those who help create the enormous wealth generated in Silicon Valley receive a living wage and decent benefits. 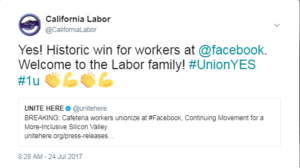