Teamster first responders for Gold Cross Ambulance are on strike for a third day in their fight for a wage that allows them to feed their families and pay for medical coverage. 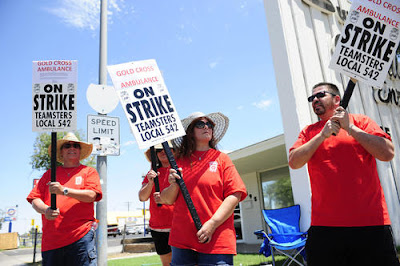 Sixty of our Teamster brothers and sisters in El Centro, Calif., are standing strong against Gold Cross Ambulance, which pays them starting hourly wages ranging from $8.78 to $9.77  for saving lives as ambulance drivers, EMTs and paramedics. They are members of Teamsters Local 542 in San Diego.

These are dedicated employees who want to do this work, who want to serve their community.

The Teamster first responders are joining a wave of strikes engulfing low-wage employers around the country. Labor unrest is escalating this week with a series of shorts strikes against fast-food companies. Hundreds walked off the job at Wendy's, McDonald's and KFC yesterday in New York. Today low-wage workers went on strike in Kansas City and St. Louis, while more workers are expected to strike in Chicago, Detroit and Milwaukee over the next few days.

Alex Ochoa has been working for Gold Cross Ambulance as a paramedic for 13 years.

“We're running out on calls–we break down going to a call. Or we have a patient on board–A/C's not working in the back. We're handing them ice packs and apologizing to them,” Ochoa said.

Despite the 106 degree heat, the employees on strike are out 24 hours a day holding signs near the corner of Imperial Avenue and Vine Street in El Centro.

Our members are strong and they will stay out for as long as it takes to get a fair contract.