Forty years ago, a powerful coalition of CEOs and corporate lobbyists decided to mount a concerted smear campaign against labor unions. For decades, these opponents of the working class have been parroting anti-union rhetoric as forcefully and frequently as they possibly can, with the goal of convincing the public that unions are antiquated, corrupt, greedy and harmful.

This smear campaign has proven to be wildly effective, and as a result, when people hear the word “union,” negative connotations often spring to mind, despite the fact that these connotations have little or no basis in reality. The effects of this shift in public opinion have left lasting impacts on working families. As public support for unions has waned and union membership has declined sharply, the middle class has diminished, wages have stagnated, and inequality has skyrocketed.

After decades of attempting to defend unions from these attacks, the Labor Movement has finally shifted gears. Now, we’re going on offense by changing the narrative about Labor, union members, and the important role that unions play in protecting the middle class.

The California Labor Federation has been spearheading this effort for almost a decade. Using in-depth public opinion research, the Federation has developed a new approach to talking about unions in a way that can effectively shift public perception and help people see unions for what they really are – working people standing together for the betterment of the middle class.

The training kicked off with a candid discussion about how the public in general sees unions, including all the misconceptions, half-truths and complete falsehoods that have been pushed by our opponents for years. The group compared those notions with the truths that they know about the benefits of unions, based on their first-hand experience.

The conversation then shifted to the numerous attacks on unions that we are already seeing under the new administration. From the White House to Congress to the U.S. Supreme Court, there’s no question that working families are up against unprecedented level of opposition to our way of life. And labor unions remain the last and best line of defense for the middle class.

“Right now, we are facing threats that we’ve never faced before, and our movement depends on how we react,” noted Smith. “The work that you as union members are doing to change the narrative is going to be what makes or breaks the middle class.”

According to Smith, in order to truly change the narrative, unions need to take a page from our opposition’s playbook and use the same tactic that the CEOs and their lobbyists have employed for decades – a tactic known as message discipline. Simply put, that means adhering to a set of compelling messages that have been proven to be effective when it comes to changing the way people view unions.

The steps to accomplish this goal are relatively simple. First, we remind people that unions are “working people standing together.” This key phrase resonates well with individuals from all walks of life, and helps provide more context for those who have had little or no direct contact with unions. Then, we reframe the problem by pointing out that it’s the CEOs and corporations – not regular working people – who are systematically dismantling the American Dream. Finally, we put a human face on union members by painting a mental picture of who a union worker really is, and evoking gratitude for the work that they do. 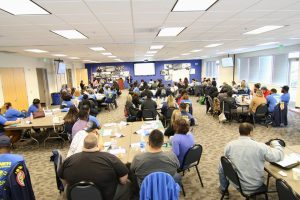 This three-part approach is the antidote to years of aggressive anti-union rhetoric, and the more often we use it, the more effective it will be. Clearly, we won’t be able to change public opinion overnight, but by sticking to this framework and endeavoring to incorporate at least one (if not two or all three) into every conversation we have about unions, we can slowly but surely redefine public perception of unions to more accurately reflect who we are and what we stand for.

By the end of the training, the members in attendance clearly understood what it would take to effectively change the narrative, and were already brainstorming new and creative ways to integrate this approach into their everyday conversations, both in person as well as online via social media. The members in attendance also enthusiastically committed to making their voices heard about the importance of the Affordable Care Act at upcoming town hall meetings.

“Of all the IBEW trainings I’ve been to, this one is my favorite,” said Organizing Steward Pam Pendleton. “[Changing the Narrative] is the most important thing we can do to keep the union going strong.”