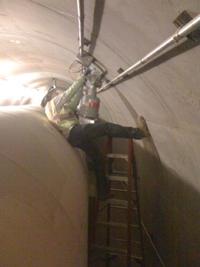 Editor’s Note: We are re-posting this one from 3/22/13 as part of National Apprenticeship Week. Also check out Hannah’s second post.

Over the next few months, we’ll be following the story of Hannah Cooper, an apprentice with Electrical Workers (IBEW). Check out her first entry below:

My entire life my mother has been a union electrician—a fact of life I never thought to question. It was where she spent her days while I was growing up, and it gave her the means to support our family. Although I understood and in my own way appreciated this fact, it never once occurred to me when considering potential career paths. I had this idea that I was going to make a career for myself in the arts and spend my time traveling the world as a dancer—maybe do some part-time modeling for supplemental income—acquire a bachelor’s degree at a four-year university back East and maybe try to join a dance company. This was the plan anyways, from my early years of childhood up through the first half of my senior year of high school, when I realized I didn’t want to be a dancer anymore. I stopped showing up to my college auditions, completely throwing a wrench in the plan.

After high school, I found myself working a series of dead-end jobs and had completed a string of inconclusive community college credits with little direction. I worked in a clothing store, a coffee shop, a restaurant, a gourmet cheese shop, as a caterer, a bartender, hostess and more. I worked each job long enough to save enough money to leave the country, which I would then do and upon returning, repeat the pattern again. After a couple of years, I was sick of the pattern. I was sure of two things: I didn’t have the patience to sit through four years of college only to graduate in debt and clueless of what to do next; nor did I want to waste any more time working part-time jobs. This was when I began considering the trades.

The practicality of trade school appealed to me, as did learning a marketable skill that I could launch into a career and become self-reliant and self-sufficient.  Around this time, I left the United States for a couple of months to go backpacking through South East Asia, where I met dozens of people in their early 20s from all over the world who supported themselves back home with a variety of jobs in construction. The dots began to connect. When I got home to Los Angeles, I went down to the Electrical Training Institute in Commerce, Calif., and applied for the IBEW Inside Wireman Apprenticeship Program. I remember several details appealed to me at the time like the health benefits, the retirement plan, the flexibility to work anywhere in North America upon completing the apprenticeship and, although I had no way of knowing whether or not it would be a good fit, I had to take a leap in a positive direction. Luckily enough, more than four years later, I can safely say I love the work and am extremely excited about the potential opportunities the IBEW offers and, in retrospect, applying for the apprenticeship program has been one of the most rewarding decisions I’ve ever made.