“Why pay dues when I can enjoy all the benefits of the union contract without spending a dime?”

This is just one of the tough questions that 60 IBEW 1245 public sector member-leaders tackled as they prepared to launch a new member-to-member educational drive to push back against the growing attacks against public sector unions.

The member-leaders, who work at 33 different Local 1245-represented public sector employers, came together for a special meeting on March 4 to gear up for the two-month, member-driven campaign. The effort is part of the union’s response to a pending U.S. Supreme Court case, Friedrichs v CTA, which seeks to drastically undercut public sector unions.

The plaintiffs in the Friedrichs case – a group of nine teachers from southern California — are backed by the Center for Individual Rights (CIR), which is funded by anti-union corporate interests, including Charles & David Koch, the billionaire brothers who funded Wisconsin governor Scott Walker and his strategy to wipe out Wisconsin’s public sector unions. Their goal is to overturn 40 years of legal precedent and do away with agency shops, fair share fees and automatic dues deductions, effectively transforming every state into a so-called ‘Right to Work’ state. Without those funding mechanisms, unions would be weakened and would have fewer resources to engage in bargaining, representation and organizing. 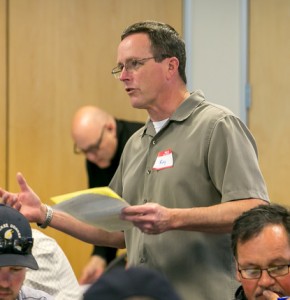 “[The backers of Friedrichs] would have you believe  the so-called ‘Right To Work‘ movement is about preserving your right to choose to be union or not. But you already have a choice,” Local 1245 Assistant Business Manager Ray Thomas stressed at the meeting. “In the public sector, under current law, you choose to be union, just as the majority of your co-workers choose to be union. Agency Shop provisions are a choice. You and your coworkers already choose whether or not to have Agency Shop provisions within your bargaining units. Friedrichsis not about choice. It’s about destroying unions and taking away your voice at the workplace.”

The recent death of Supreme Court Justice Scalia presents a temporary reprieve in the Friedrichs case, but US Supreme Court Chief Justice John Roberts retains the right to hold the case over to be re-argued once a new justice has been nominated and confirmed. 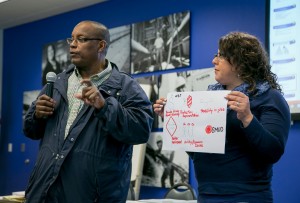 “I have always felt that teamwork is what keeps us safe at work.  We count on each other to look out for each other’s back so we can go home safe each day,” said SMUD senior employee and IBEW 1245 veteran Don Hurdle. “Paying dues is just an extension of me doing my part to help the team. I would never think of having another crew member doing my part of the job and me being able to get credit for a job well done… and I would never expect another member to pay my share so I can boast about how good my benefits, pay and retirement are.”

Hurdle’s Business Rep, Sam Glero, underscored the value of union representation when he held up the bright yellow SMUD contract, listing the negotiated protections and benefits that workers enjoy.

Local 1245 Business Rep Sheila Lawton summed up the benefits of being a dues-paying union member in one word.

“Representation!” she said. “And the knowledge that you can dial my number at any hour and know I will have your back.” 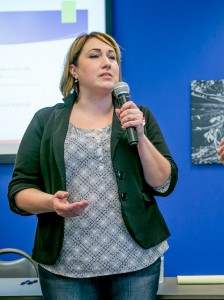 Member after member shared anecdotes about the difference that the union makes in their everyday lives.  A voice at work, job security, good wages, the ability to provide for their families, insurance, a secure retirement, free time to spend with family, training, safety, respect, solidarity and stability were among the benefits of unionization that the members identified.

Kristen Schiavone, an IBEW 1245 member at Plumas-Sierra Rural Electric Cooperative, told the story of how the union-negotiated medical insurance plan saved her family from bankruptcy when her husband received a cancer diagnosis.

“We paid $10 for crutches,” she recalled. “The rest was covered by insurance.”

Another union brother recounted that before he secured a union job, he never saw his young kids due to long and unpredictable working hours.  Others recalled working without a union, and the stark difference in wages, benefits and working conditions.

But the union difference isn’t just anecdotal; there’s a wealth of data to back it up. In so-called “Right to Work” states where public sector workers do not have union representation, workers earn, on average, $5,071 less than workers in free bargaining states. They are 31% more likely to lack decent health insurance, and are 13% more likely to live in poverty.  Public sector workers are exempt from most wage-and-hour laws, and public sector unions play a critical role in ensuring that these civil servants have the same sort of protections that private-sector workers are guaranteed under the law.

A Voice in Politics 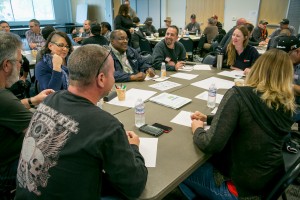 If the plaintiffs in the Friedrichs case prevail, members would be required to “opt in” rather than “opting out” of making political contributions on an annual basis. At IBEW Local 1245, numbers contribute just $5 per member per year into the political fund.  Any member who does not want to participate in the political fund can request a refund of their $5 contribution.

A common question that often comes up at the workplace is “Why does the union engage in politics in the first place?”  The fact is, unions need to have a voice in politics in order to protect workers’ rights and interests.

Business Representative Randy Osborn, who represents IBEW 1245 workers in the ‘Right to Work’ state of Nevada, explained why unions need to raise their political voice.

“In 2012, the attack on labor was brought to California. We fought Prop 32 tooth and nail, and rallied Labor to preserve our way of life,” IBEW 1245 Organizer Jammi Juarez recalled. “If Prop 32 had passed, we would have been severely crippled. Here we are preparing for the next battle in this war on Labor and the middle class.”

IBEW International organizer Rick Thompson reminded the group that anti-union interests often use culturally-charged wedge issues to divide and distract us from the core issue of workers’ rights.

“Whether we are Republicans or Democrats, we are all union brothers and sisters,” said Thompson. “Our individual beliefs often differ, but we have common interests:  our rights in the workplace and our right to be union. That’s what we are fighting for.  We have to bring the conversation back to the brotherhood and the fight for a voice and respect.” 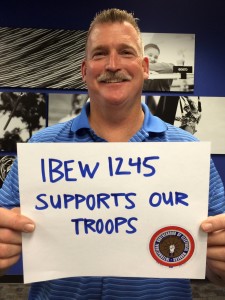 The 60 member-leaders mapped out the steps they will take to conduct one-on-one conversations with each of the 2,400 public sector 1245 members over the next two months. Their first step was to identify on-site volunteers to help them go department by department, member by member, to talk about the union difference and the importance of sticking with the union no matter what the Court decides. They took assignments, including making presentations at unit meetings, posting flyers on union bulletin boards, and brainstorming additional ways to convey the importance of union membership. They set a goal to generate more than 120 photos of their co-workers with statements of why they support the union.

IBEW 1245 Business Manager Tom Dalzell celebrated the effort saying, “This is the strength of our Union – our members leading the charge and organizing. We will continue to educate and defend our members and their right to maintain their strong Union and their hard earned wages, benefits and working conditions.”

For ongoing updates on the campaign, flyers, Q&A, articles and more photos, visit www.ibew1245.com/friedrichs. If you would like to add your picture and message to the campaign, email Rebecca Band at rgb1@ibew1245.com.