If enthusiasm is contagious, then we’ve got an epidemic breaking out at IBEW Local 1245. 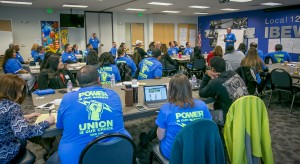 As the 2016 class of IBEW 1245 Organizing Stewards filed into Weakley Hall for their first meeting and orientation on Jan. 22, their enthusiasm and positive energy was palpable. The number of Organizing Stewards has nearly doubled since last year, proving without a doubt that once the activism bug starts spreading, there’s no stopping it.

Organizing Steward Logan Jonas, who works as a Night Cable Splicer for PG&E in San Francisco, has definitely caught the organizing bug, and says his favorite part of the program is being able to effect positive change for his co-workers and others.

“Being a part of the Organizing Stewards has changed my life. I’ve been able to grow in ways that I didn’t expect,” said Jonas. “I am a better person for having the opportunity to be involved and give back to the hard-working people of this union and this country.” 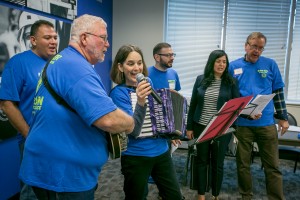 The group participated in a fun sing-along, featuring timeless labor anthems such as “Solidarity Forever”

Of the 70 members who make up this year’s Organizing Steward army, about half are returning from last year, while the other half are newcomers to the program. As the seasoned Stewards shared their favorite experiences from the previous year, the new Stewards listened in rapt attention, and were clearly excited to be a part of such a groundbreaking program.

“It’s a wonderful feeling when you know you’re becoming involved in something for a greater purpose, and that’s what we stand for!” said new Organizing Steward Ashley Boles, who works at the PG&E Fresno call center. “Being able to experience solidarity and be a part of something so exciting just gives me a delightful feeling.” 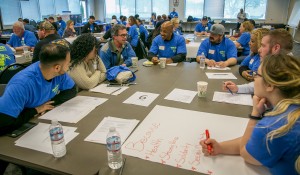 The action-packed day-long orientation included a crash course on Organizing Stewardship, including expectations and responsibilities, as well as member engagement strategies and tactics to set the Stewards up for success. The training session also featured group activities, breakout sessions, sing-alongs and a special movie screening. 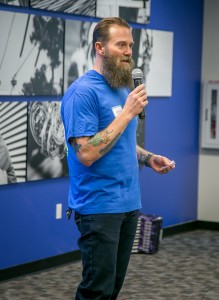 “Being tasked with helping plan the orientation and induction was exhilarating!” said Wilson, an NV Energy lineman who has been involved with the Organizing Steward program since its inception. Serving on the Planning Committee made him realize just how committed IBEW 1245 is to the Organizing Stewards, and he walked away with “an even greater appreciation of what it takes to organize” such a program.

The Heart and Muscle of the Union

IBEW 1245’s one-of-a-kind Organizing Steward program is the brainchild of IBEW 1245 Business Manager Tom Dalzell, who came up with the idea in 2009 as a way to encourage younger members to become more involved with the union. The program has evolved over the years, and now, the inter-generational, hands-on Organizing Steward approach is gaining repute throughout the Labor Movement. Local 1245 has been recognized by the National AFL-CIO, the California Labor Federation and several local labor councils for its outstanding work in the field of member engagement and leadership development. 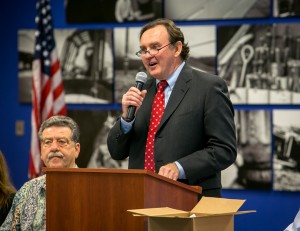 “The best organizing model is the 1245 model,” said Art Pulaski, leader of the California Labor Federation, an umbrella group of 1,200 unions representing upwards of two million members across California.

Pulaski made a special trip to Vacaville to watch the Organizing Stewards get sworn in at the quarterly Advisory Council meeting on Jan. 23. He told the Local 1245 Advisory Council that he brings up the Organizing Steward program frequently, and uses it as a key example whenever he’s asked about the best way to get members – particularly younger members — to be more active in their unions. He believes it to be the beacon by which all other unions should follow when developing their own member engagement programs.

“I’ve talked about the 1245 Organizing Steward model as being the way to build the heart and the muscle of the union,” said Pulaski. “It’s how you build bargaining power … and also political power, which is so essential.” 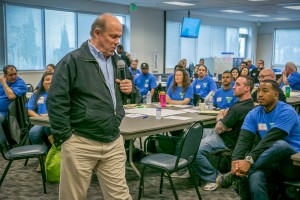 “You make us proud,” Dalzell told the room full of Organizing Stewards. “You are carrying on the finest tradition of the Labor Movement. You have changed who we are as a union, and you will continue to do so. I thank you from the bottom of my heart.”

2016 is already shaping up to be an action-packed year for the Organizing Stewards. Between leadership development trainings, the contract campaign at PG&E, solidarity activities, political and legislative endeavors, and member outreach around the Friedrichs v. CTA Supreme Court case, the Stewards certainly have their work cut out for them. And they don’t mind it in the least. In fact, they embrace each and every opportunity to get involved. 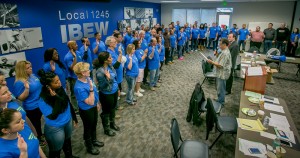 The Organizing Stewards were sworn in at the quarterly Advisory Council meeting on Jan. 23

“To belong to a union and not be active would be choosing to not act on your own behalf,” said Jonas. “When working people stand together, it improves the quality of our work and our lives.”

“I know that I will get memorable personable experiences and fulfillment that I can’t receive anywhere else,” said Boles. “I know that I will gain the experience and knowledge to create more of an interpersonal experience with my peers in regards to them really gaining a understanding of what we as a union stand for … and memories to last a lifetime with my IBEW brothers and sisters.”