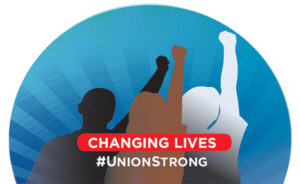 Download Labor’s 2018 Legislative Agenda and the below Fact Sheets (PDF):
The social compact of employment constructed over the last century by the American Labor Movement has been deeply fractured. The expectation of finding one good job and keeping it for a lifetime has been replaced by the need to jump from job to job, without secure benefits or steady income. Workers are hired as independent contractors, leaving them to bear all the economic risk of losses, downturns, and unemployment. Jobs are not only outsourced, but they are also automated away. Many workers today have no regular workplace, no reliable hours of work, and no one to hold accountable when their rights are violated.

As we face the growth of the gig economy and the threat of automation, Labor remains committed to an economy where hard work is rewarded and where workers have a voice on the job. No one who works hard should live in poverty. We will not stand by as workers are treated as disposable or obsolete. We will not allow this bleak future to be imposed upon working people. We must have a seat at the table to help determine the future of work. We will build stronger unions to shape the workplace of the future into one that offers a more just economy for all.

–Track Job Quality and Public Subsidies of Distribution Centers: AB 2853 (Medina)  Cities compete to offer economic incentives that will entice companies to create jobs. We will require companies to disclose the amount of subsidies they are receiving and the types of jobs being created.

– Labor Protections for Port Truck Drivers: SB 1402 & SB 1403 (Lara)  will raise labor standards for port truck drivers, who are some of the most exploited workers in California.

– Accountability for electric vehicle subsidies. For generations, the American car industry helped grow the middle class in this country. The electric vehicle industry has the opportunity to do the same. As state taxpayers are subsidizing the purchase of these cars, companies that want public funding should have to show they are “fair and responsible employers” so that we are not subsidizing companies that skirt the law.

–  Stop Unfair Forced Waivers of Workers’ Rights: AB 3080(Gonzalez Fletcher)  More than half of all private sector workers are required to waive their right to bring a claim if they are cheated, harassed, or retaliated against. These mandatory arbitration agreements leave a worker trapped in an employer’s private, confidential system and unlikely to ever get justice. Non-disclosure agreements prevent workers from speaking out about abuses. We will stop employers from making workers sign waivers of rights as a condition of employment.

– Expand protections for temporary workers: AB 3081(Gonzalez Fletcher) Temporary jobs continue to grow. California law provides joint liability on companies using temporary and contract workers who face wage theft, but not for sexual harassment or discrimination. We will extend client employer accountability for those violations. This bill will also create a presumption of retaliation when a worker is retaliated against after reporting a violation, lengthen the statute of limitations for retaliation claims, and expand training requirements

– Technology, Automation, and the Future of Work Commission: SB 1470 (Stern) Automation is accelerating quickly, from self-driving trucks to robot warehouse workers. We must protect workers from massive job losses by making smart decisions about how to use public funds, how to handle mass displacement, and what restrictions are needed for public and worker safety. We will push for the creation of a commission, that includes workers’ voices, to study the impact of technology and automation on workers and make policy recommendations.

Health care cost containment. We support a single payer health care system. To achieve it, we must control the skyrocketing cost of health care for purchasers and patients. We will establish a state agency to regulate the prices of hospitals, doctors, clinics, and health plans for our members and trust funds with the goal of containing costs, improving quality, and reducing health disparities.

Working people face a housing crisis, both because the cost of housing is too high and wages are too low. We will push for housing policy that promotes affordable housing, protects tenants from displacement, and protects the voice of workers and the community in development decisions. We will also work to preserve the Homeowner Bill of Rights to stop predatory lending. Housing should be part of our public infrastructure.

–  A pending court decision could turn the public sector “right to work”. At a time of record inequality, wealthy donors and corporations want to weaken workers’ ability to stand together as a countervailing economic force. We will resist these attacks by building stronger unions. We will work to ensure that public workers have access to their union and can be more engaged than ever in retaining their collective voice.