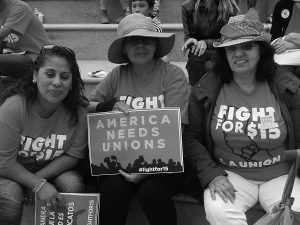 Income inequality is one of the greatest challenges of the 21st century. It threatens to destroy the middle class, economy, and democratic values of our nation. Unions are the last bastion in the fight against income inequality and unfettered corporate greed. We are the only institution that stands in the way of CEOs and their lobbyists as they seek to reap even greater profits off the backs of workers. The right for workers to stand together and organize a union is the strongest weapon we must fight growing income inequality.

The challenges to organizing, especially in the private sector, are real and only made worse by the current Administration dismantling the progress made by the NLRB and DOL under the previous administration. Ruthless employer opposition, intimidation, threats, and firings are more common than ever during organizing campaigns. According to a study by the Center for Economic and Policy Research, employers illegally fire workers in over 30 percent of all organizing drives. In nearly 80 percent of drives, management forces workers to attend one-on-one anti-union meetings with their own supervisors. Captive audience meetings, another common management ploy, further intimidate workers. Even when workers overcome these obstacles to win union recognition, employers frequently refuse to agree to a first contract.

Another challenge to union organizing is the use of subcontracting, temporary workers, and misclassification of independent contractors. Employers are increasingly distancing themselves from their workforce and creating legal barriers to avoid being held accountable by workers and unions. Union organizing has become increasingly innovative as the economy shifts from a traditional employment relationship to one where employers deny that they employ workers altogether.

The Federation is committed to supporting organizing efforts, and in 2011, officially made organizing our top priority. We will continue to support union organizing through legislation, research, industry analysis, trainings, and other initiatives to increase union capacity and organizing campaigns.

The Federation applauds the workers and unions who continue to successfully organize in hostile, anti-worker climates. From high-tech shuttle drivers to cafeteria workers, the Federation supports our unions as they continue the fight against anti-union employers, old and new.

A shining example of contingent worker organizing is the work of the Teamsters, United Service Workers West, and UNITE HERE in Silicon Valley. Nowhere is income inequality more glaring than in Silicon Valley where the top-three companies had a collective revenue of $247 billion and a market capitalization of over $1 trillion in 2014, while workers couldn’t make ends meet. The Teamsters stepped into the fray and organized bus drivers who work for contractors that drive employees from the Bay Area to Facebook, Apple, eBay, Yahoo, Zynga, and Genentech campuses in Silicon Valley. The Teamsters won a series of elections and negotiated contracts guaranteeing workers good wages and benefits, even though they work for subcontractors of the tech giants.

USWW and UNITE HERE have also launched organizing campaigns in Silicon Valley—focusing on subcontracted janitors and food service workers. With the support of the South Bay Labor Council, Silicon Valley Rising, and other unions and community groups, these unions are organizing the workers who make the high-tech industry run every day. Through a combination of organizing, local ballot initiatives, and community campaigns, unions are proving that the contingent economy is not a barrier to organizing and subcontracted work can provide good wages and benefits. Innovative partnerships such as these serve as important models on how to organize workers in low-wage industries. The United Auto Workers is also taking on a tech giant—the electric vehicle maker Tesla, owned by tech darling Elon Musk. Tesla took over the former GM and Toyota auto plant, NUMMI, that employed thousands of union workers until it closed in 2010. They re-hired many of the NUMMI workers, paying them less today than GM and Toyota did a decade ago when they worked under a union contract. Tesla is now the only auto manufacturer left in California and is entirely non-union. Tesla may be a high-tech employer in the “new economy” but there is nothing new about the anti-union campaign they launched against worker union organizing on the shop floor.

As the administration dismantles federal legislation and regulations that attempted to level the playing field so that workers can choose union representation free of intimidation and retaliation, we will support reinstating those laws at the state level. We support elected officials who advocate for legislation to remove barriers to union organizing and who stand with workers at workplaces, on picket lines, and in the fight for union representation and good contracts.

While we work for stronger labor laws, the Federation also supports innovative organizing strategies that our unions have adopted in place of the outdated and ineffective NLRB process. The current NLRB process is so slanted toward employers that there is virtually no opportunity for a fair election. We support the use of neutrality agreements with employers, card-check, community elections, the requirement of card-check neutrality in granting licensing or tax payer funding for business, and other measures to win union recognition that respect the will of the workers.

We continue to support organizing tactics like civil disobedience, corporate campaigns, community mobilizations, alliances with community-based organizations, boycotts, strikes, salting, and other forms of direct action to win recognition and contracts. We urge the cooperation of affiliates in multi-union efforts, which can effectively pool resources and eliminate jurisdictional disputes.

Standing Up for All Workers

The Federation strongly supports the rights of all workers to organize and to have their voices heard in the political process. Unfortunately, those rights have come under attack time and again through the efforts of right wing anti-union activists. The Federation unequivocally opposes anti-union measures that strike at union political power. These anti-union measures would unfairly restrict uses of union dues and make union members play by different rules than big corporations when it comes to participating in the political process.

We call for the extension of full collective bargaining rights for all public employees, including the inviolate right to strike and the right to use dues deducted from wages for political purposes. We oppose attempts by right-wing groups to weaken the power of organizing public employees by attempting to take away Fair Share fees. For public employees not permitted to strike, we recognize the need for binding interest arbitration to level the playing field and ensure fairness in bargaining. We support the right of farm workers, and all workers, to use majority sign up to join a union free from employer intimidation.

We stand in solidarity with the campaigns of fast food workers in California, and across the nation. Fast food workers have not let the challenges of organizing in a high-turnover, highly franchised industry deter them from standing together. Workers used the tactic of one-day strikes and garnered national attention sparking a national debate on the need to raise the minimum wage. More organizing and innovative strategies are needed to unionize the fast food industry.

Giving Workers the Tools They Need to Organize

The Federation calls for comprehensive labor law reform to ensure that workers can organize a union without risking their job. Employers that fire workers for union activity or use other tactics to interfere with workers’ free choice deserve severe and immediate penalties. Banning permanent replacements for strikers is essential for equitable labor relations. We also oppose any legislative measure to ban the right to strike for workers.
We back prompt resolution of representation questions, union certification based upon determination of majority support through card check, arbitration of unresolved first contracts at the request of the union involved, and the prohibition of corporate reshuffling, including double breasting, bankruptcy, and ownership changes, which are used to evade contractual rights and end union representation.

While all workers face intimidation and reprisals when they exercise their right to organizing, immigrant workers are particularly vulnerable. Employers can use the threat of deportation or other immigration-related retaliation to keep immigrant workers from speaking up and to send a chill through the entire workforce. Non-immigrant workers may not want to act to organize or report labor violations if it puts their immigrant co-workers at risk.

We applaud the LA/Orange County Immigrant Worker Organizing Project, a project of the AFL-CIO and the California Labor Federation. The ACTION project’s goals are to advance immigrant worker organizing campaigns coupled with recruiting training bilingual organizers and researchers through year-long organizing apprenticeships. The organizers are trained in organizing skills including rights on the job, citizenship, and immigrant workers protections and include this in their campaign work. This has helped build workers’ ability to fight more effectively in their workplaces and communities. Apprentices who’ve graduated from the ACTION project have gone on to organize full-time in many unions.

California unions must continue to pursue state and local level reforms to support organizing. We also call for renewed support for labor law reform on the federal level, including the passage of the major labor law reform. The Federation will continue to support the efforts of unions to organize and work to educate legislators and the public on the importance of protecting the rights of all workers and organizing unions to rebuild the middle class in this state. 4