Read the full article on Beyond Chron by clicking here. 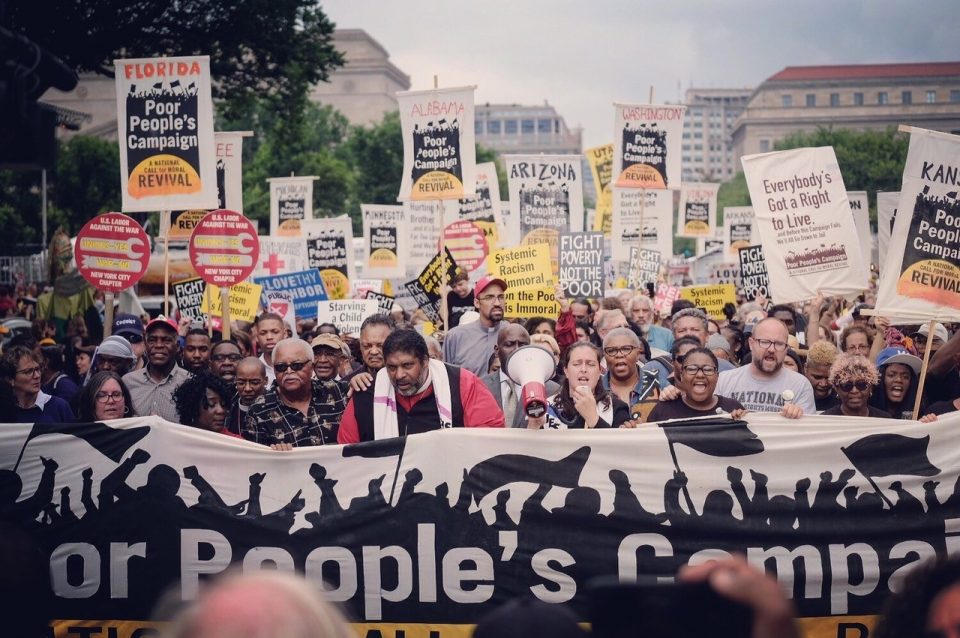 On June 18th, tens of thousands will assemble at the National Mall for a march organized by the Poor People’s Campaign (PPC).

The PPC is a nationwide interracial and interfaith coalition of 200 organizations in 45 states. The “Moral March on Washington and to the Polls” will focus on the needs of 140 million poor and low-income Americans, who comprise 43 percent of the population. President Biden’s ‘Build Back Better Act,’ the most ambitious legislation proposed since the 1960s to address poverty, raise living standards, and lay the foundations for shared prosperity, is stalled in the Senate. The march will demand Congressional action now and support for candidates who will not ignore low-income Americans.

According to PPC co-chairs Bishop William Barber II and Rev. Dr. Liz Theoharis, the march will address “the interlocking injustices of systemic racism, poverty, ecological devastation, the denial of health care, militarism, and the war economy.” The PPC demands a “Third Reconstruction” to shift national priorities and rebuild the economy from the bottom up.

The march explicitly draws upon the legacy and unfinished agenda of the first Poor Peoples campaign led by Dr. Martin Luther King and the Southern Christian Leadership Conference (SCLC), launched in November 1967. By then, the civil rights movement had dismantled segregation in the south and won the right to vote for African Americans. Still, King claimed that full citizenship for black and all people of color required organizing “the poor in a crucible to reform society in order to realize economic and social justice.”

A month after King’s assassination in April 1968, SCLC mobilized a ‘rainbow’ coalition of more than 50 civil rights and poor people’s organizations to come to Washington and construct a tent ‘Resurrection City’ on the National Mall. According to historian Sylvie Laurent, by fusing the economic and racial justice movements and engaging in ongoing nonviolent direct action, the campaign intended to pressure the federal government to approve sweeping economic reforms and an “Economic Bill of Rights,” resulting in what King called “a radical redistribution of political and economic power.”

King and SCLC believed such radical change could only occur if poor people united across racial lines to demand structural transformation to address inequality and poverty. King claimed that “we can all get more together than we can apart, and this is the way we gain power.”

The motto of that first PPC was “Jobs and Income Now.” The campaign demanded full employment and guaranteed living-wage public jobs for the unemployed; raising the federal minimum wage to become an actual living wage; a guaranteed minimum income for those excluded from the workforce due to age, automation, disability, or caretaking responsibilities; construction of half-million affordable homes a year; access to credit and land for the rural poor; $30 billion annually to fight poverty,  invested especially in quality public education and early childhood education; and withdrawal of all troops from Vietnam, redirecting military spending to domestic reconstruction.

The contemporary PPC recognizes that structural inequality, racism, and militarism are worse than they were a half-century ago. Climate change makes the urgency of the moment even greater. The campaign underscores that poor and communities of color are disproportionately impacted by the COVID-19 pandemic, the climate crisis, widespread ecological devastation, mass incarceration, and police violence. Like the 1968 Poor Peoples Campaign, the new campaign claims that only a multiracial coalition of poor and low-income people can “shift the political landscape” and bring about a fundamental economic restructuring “that lifts from the bottom so everyone can rise.”

The anchor for the new PPC is labor, faith, environmental, feminist, LGBTQ, civil and immigrant rights organizations struggling for transformational change at the state and local levels. The ‘Living Wage’ and ‘Fight for $15’ campaigns exemplify grassroots organizing that fuse race and class. Since 1994 one hundred and twenty cities and counties have passed Living Wage laws boosting wages for workers employed by city and county contractors higher than their state’s minimum wage. Moreover, since 2014, 54 cities and counties have established minimum wage laws above their state’s minimum wage.

Thus, the Fight for $15 has helped shift public opinion about what it costs to make ends meet in a given region and build support for a higher minimum wage. In 2016, only California had approved a $15 an hour minimum wage. By 2022 eleven states had done so.

If the Raise the Wage Act were approved by Congress, lifting the federal minimum to $15 an hour by 2025, 60 percent of essential and frontline workers would receive a pay increase, including one in three black workers and one in four Latino workers compared to one in five white workers.

The campaign’s “Moral Policy Agenda to Heal and Transform America” includes: raising the federal minimum wage to $15 an hour and then annually increasing it until the minimum reaches a livable wage based on the rising cost of living; a guaranteed basic annual income for all (monthly $2000 per adult and $1000 per child); expansion of Medicaid in all states, protection of Medicare, and establishing a universal single-payer health care system; concrete steps towards ending mass incarceration such as abolishing ‘three strikes’ laws and the death penalty; and a federal jobs program to create millions of quality jobs prioritizing poor and low-income communities in the care economy, sustainable food systems, housing renovation and construction, environmental restoration, renewable energy, and climate resilience.

The PPC also advocates for ending deportations and comprehensive immigration reform, canceling student debt, enacting a rent freeze and halting all foreclosures and evictions, and an overhaul of the broken National Labor Relations Act to protect the right of all workers to organize a union, including temporary, contract, and undocumented workers.

Accomplishing this audacious agenda requires enlarging the Democratic majority in the Senate and holding the Democratic majority in the House. Then the real work of bringing these policies to fruition can begin. The movement must pursue an ‘inside-outside’ strategy or what Reverend Barber characterized as “a transformative movement that will not only go to the polls but will organize in the streets.”

Such a strategy is a direct descendent of the civil rights, anti-war, and feminist movements of the 1960s. In King’s 1963 “Letter from a Birmingham Jail,” he stated that “the purpose of our direct-action program is to create a situation so crisis packed that it will inevitably open the door to negotiation.”

This strategy requires increasing participation by low-income voters in the electoral process. A recent PPC report, “Waking the Sleeping Giant: Poor and Low-Income Voters in the 2020 Elections,” finds that low-income families earning less than $50,000 a year voted in record numbers in 2020, constituting 35 percent of the electorate. The study notes that low-income voters strongly support policies addressing poverty and inequality, such as a $15 minimum wage and a government-run health care plan. Robust turnout by low-income voters was decisive in the battleground states of Arizona, Nevada, Georgia, Michigan, and Wisconsin, where the Biden-Harris margin of victory was less than 3 percent.

The June march hopes to promote a broad electoral mobilization to register and turn out low-income, minority, immigrants, and other progressive voters for November 2022 mid-terms in greater numbers than in 2020. The challenge will be to secure voting rights. Since 2010, 27 states have approved voter suppression laws, using all available tactics to target and exclude low-income and voters of color.

Electoral organizing to overcome voter suppression must be rooted in direct contact with voters at the door, on the phone, at the workplace, and in places of worship. It’s crucial that Congress restore and expand the Voting Rights Act to deter voter suppression and gerrymandering by Republican-dominated states. In addition, nonpartisan fusion coalitions at the state level must guarantee the integrity of the electoral process and protect local officials who oversee and certify elections.

The Past Before Us

The lessons of history are clear: to build power, sustained grassroots organizing and nonviolent direct action must drive legislative change and increased electoral participation by low-income and voters of color. The landmark 1964 Civil Rights Act and then the 1965 Voting Rights Act were achieved after more than a decade of peaceful demonstrations, mass civil disobedience, and labor and community organizing by the civil rights movement.

We find ourselves poised at a critical moment, with an upsurge of the racial, gender, and economic justice movements. The ongoing Black Lives Matter opposition to racist police violence, escalating worker organizing at Amazon and Starbucks, and the massive protests against the overturning of Roe v. Wade could eventually merge into a swelling tide of people power that the national Poor Peoples Campaign represents.

Empowered and inspired by the June 18th march, participants will return to their communities to register, educate, and turn out voters for progressive Democratic candidates in November. They will simultaneously build enduring local coalitions to pressure Washington and state capitals to implement the PPC Moral Budget and Policy Agenda. Please join the march! More info at www.poorpeoplescampaign.org/

Martin J. Bennett is Instructor Emeritus of History at Santa Rosa Junior College and a research and policy associate for UNITE HERE Local 2850