Yesterday on the fourth anniversary of the first Fight for $15 national action, working people in 340 cities across the country took to the streets to demand justice for ALL. Calling out major corporations like McDonald’s and Uber as well as working conditions and low wages for workers at airports, working families and community brothers and sisters came together to fight for justice in low wage work. Their demand? $15 per hour minimum wage AND a union.

I was able to take part in two actions in Northern California yesterday (for more information on the actions held around the country, visit fightofr15.org). Outside a McDonald’s in Oakland, dawn barely broke and Fight for $15 kicked off their first Bay Area action of the day. Lisa, a student supporter of Fight for $15, walked with low wage workers for union protection. During the action she said, “The [pay] is such a struggle with inflation to match. Wages always need negotiation. Unions are working on behalf of the workers” The action ended with nearly 50 workers participating in civil disobedience, shutting down the streets to call attention to their fight for justice. 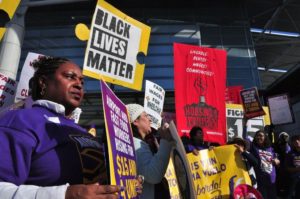 The fight continued across the bay at San Francisco Airport (SFO), where airport workers, child care providers, ridesharing workers, and others banded together for collective power. Community support from Black Lives Matter, United Farm Workers, and water protectors also came out for solidarity. Kevin Prasad, a U.S. Army veteran and security officer at SFO, said he sees the Fight for $15 as a hope for more: “I would like my own place, and to finish college.” The emphasized he came out not only to fight for his future, but to raise awareness for bosses, too: “I don’t ask for give outs, I earn it. [It’s about] getting companies to understand the importance of a living wage and responsibilities we hold down at SFO”. For Adham Shaheen, a rideshare driver with the San Francisco Bay Area Driver Association, the day was about being a voice for his “brothers and sisters who work where there is big suffering. There are over 1.5 million of us ride share drivers. We are workers for Uber and Lyft, they have employer control, and we want employee recognition.”

Workers with the Fight for $15 have won significant victories across the nation including a path to a $15 minimum wage in California signed into law this year. The SFO action celebrated and acknowledged how far low-wage workers have come in this fight for justice since their first protest in 2012. Colorful streams of signage and coordinated shirts crossed the international terminal, and a large flag reading “TIME TO RISE UP” waved against the blue skies. The crowds cheered on in chants and smiles. 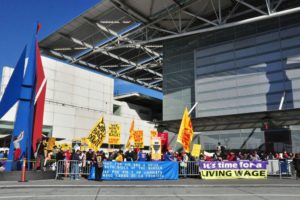 Guadalupe Salazar, a worker at Popeye’s, has been a leader in the Fight for $15 from day 1. She described her start as a “revenge story.” Formerly at McDonald’s, her boss was abusive. “I tried suing and lost. An organizer told me about this campaign, and I asked, ‘What’s the point?’ He listed higher wages, benefits, security… and then ‘respect and dignity’. I sued a second time with campaign’s support and won.” Towards the end of the action at SFO, Salazar reaffirmed that her inspiring journey will continue saying, “I will keep moving forward. If I don’t, I won’t survive. If I’m not going to fight, I won’t win.”