Solidarity knows no borders! To date, over 2,000 California union members have volunteered to turnout the vote for Election 2016 in our neighboring “Battle Born” state, Nevada – and the number will keep keeps climbing through Election Day.

From the presidential election down to local ballot measures and candidates, union members are committed to winning for working people across the country. While this is true in every election, the stakes are undeniably high in 2016. Defeating anti-worker Donald Trump, securing senate victories so we can finally get down to the essential business of nominating a justice to the Supreme Court, and electing local and statewide candidates who will go to bat for working people are all incredibly important for the future of our labor movement and for our nation.

Nevada is not only a key presidential battleground, but could also determine which party controls the Senate. Polling out of Nevada has consistently shown tight races to elect labor endorsed candidates Hillary Clinton for President and Nevada Attorney General Catherine Cortez-Masto for Senate. With our high density of union members in CA always ready to make history, galvanizing volunteers to head to Nevada was a no-brainer. And while these races are still too close to call, returns from early voting are showing union boots on the ground are having a major impact in Nevada.

But the members going door-to-door are not all from Nevada. Next door in California, which is devoid of presidential drama because it’s a safe bet that Clinton will carry the state, the California Federation of Labor has already met its goal of sending 1,000 union volunteers to help get out the vote in the Silver State. Now it hopes to reach 2,000. [Editor’s Note: this was published before Labor surpassed the 2,000 goal]

“That’s what labor does,” said Steve Smith, a labor federation spokesman. “They’re going out twice a day to knock on doors and have a real discussion with voters about the importance of the election and stakes for working people.”

Labor’s impact at the polls is becoming more and more evident but as Steve Smith said, walking door to door in Nevada has also been a memorable experience for volunteers, as well. Lin Glen, a retired AFSCME union member recently emailed me about her decision to volunteer in Nevada with Labor:

“I drove to Reno from Humboldt County to GOTV with the Unions because Nevada is a must-win. I’ve been walking precincts and last night, heard Elizabeth Warren and Catherine Cortez-Masto speak at a GOTV rally. I’m all fired up to help elect Hillary and Catherine and turn Nevada from purple back to blue!”

Huffington Post also recently joined the Los Angeles County Federation of Labor on one of their buses to Las Vegas and followed union electrician Sarah Jones as she walked door-to-door. Emphasizing the incredible significance of this election’s outcomes, Jones starts out the video segment with a powerful statement:

Union members have also been tweeting about their experiences in Nevada with hashtags #NVLabor16, #1uVote and more: 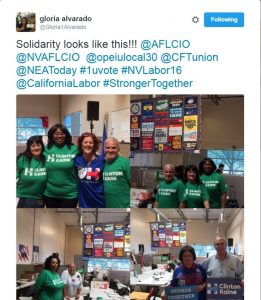 Stay tuned for the final tally in Nevada!

Not able to head to Nevada this weekend and next week for GOTV? There are plenty of volunteer opportunities right here in California. Find one near you!