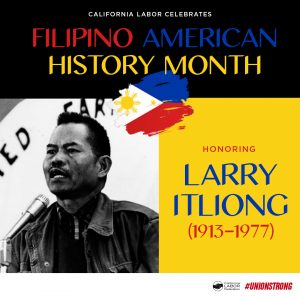 The United Farm Workers movement is one of the most important demonstrations of worker power in American history. While the Delano Grape Strike is often cited as one of the most prominent labor actions of  the 20th century, we rarely hear the story of the Filipino activists and workers that played a critical part in sparking that historic worker action. As we celebrate Filipino American History Month, we honor Larry Itliong, an inspirational and militant labor leader who played a pivotal role in organizing migrant farmworkers.

Itliong immigrated to the United States at 15 years old and immediately began working as a farmhand and laborer in Alaska to provide for his family. Itliong’s dream was to become an attorney to fight for the underprivileged and the poor in court. Unfortunately, Itliong’s family’s own impoverishment, along with racism, barred him from getting the education needed to become a lawyer.

But those barriers didn’t stop Itliong from making a huge impact on underserved populations, especially Filipino Americans. Despite the prejudice and hardships he endured, he found his voice, not in a courtroom, but on the picket line.

Itliong’s first strike took place in Washington state alongside lettuce workers. He also helped workers at an Alaskan cannery unionize, where he lost three fingers in an accident, earning the nickname “seven fingers.” Itliong then helped organize farmworkers across California, including his hometown Stockton, where he recruited over a thousand workers to join the Agricultural Workers Organizing Committee(AWOC), an affiliate of the AFL-CIO. His dedication and resilience to the labor movement was so impressive, he was tapped by national union leaders to help Filipino grape workers, also called Manongs, that were facing terrible working conditions and pay cuts in Delano.

On September 7, 1965, Itliong convinced grape workers at the Filipino Hall to go on strike. He also garnered support from local families in Delano to join Manongs in their fight for better working conditions and wages. The next day, more than 2,000 Filipino farm workers marched off the job, refusing to pick grapes and other crops. These workers stood together on the picket line demanding the right to form a union, signaling the first wave of the Delano Grape Strike.

It was Itliong’s leadership during the Delano Grape Strike that set the stage for the for a merger between AWOC and the National Farm Workers Association, creating the United Farm Workers of America, led by Cesar Chavez, Dolores Huerta and Itliong.In 1966, Itliong joined Chavez and Huerta as founding board members of the California Rural Legal Assistance, created by President Lyndon Johnson as part of his War on Poverty.

To this day, Itliong’s dedication to civil and workers’ rights continues to have a lasting impact for Filipino-Americans, labor activists, and farmworkers across the nation. Long-time Delano resident Roger Gadiano and Filipino-American, who gives tours of where the historic farmworker movement took place told NPR:

“We’re a part of a big history, which is bold. We took a step that no one would take..He [Larry Itliong] gave our people some dignity. He gave his guts.”

Larry Itliong was a pioneer of worker and immigrant rights, inspiring generations of activists to carry on his fighting spirit. Itliong’s persistence and devotion to the labor movement made it possible for both low-wage workers and Filipino-Americans to have a stronger voice and demand a better life.

Under a bill authored by Assemblymember Rob Bonta and signed into law by former Gov. Jerry Brown, October 25 is now recognized in California as Larry Itliong Day.

If you’re in the LA area, don’t miss this special celebration of Itliong and the movement he helped build at Cal State Los Angeles on Oct 24!