A busload of Local 1245 members who work at Diablo Canyon traveled up to Sacramento for the rally, where they were joined by elected officials, union leaders, Local 1245 Organizing Stewards, union staff and supporters.

Local 1245 Business Manager Tom Dalzell carried home the message that the next generation of Californians are relying on Diablo Canyon in a multitude of ways, both environmental and financial. 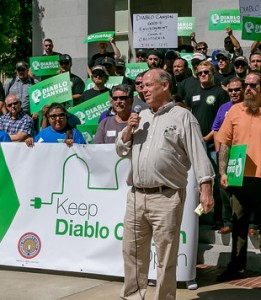 “I’ve got two really good reasons to keep Diablo Canyon open — Anna and James Lyman,” Dalzell said, recognizing Diablo Canyon employee Adam Lyman’s two children, who came to the rally with their parents. “Diablo Canyon is the largest private employer in the county, paying over $20 million in property taxes. The schools and public services in San Luis Obispo all depend on the jobs at Diablo Canyon.”

“We recognize that greenhouse gas emissions are a problem, and we want to be part of the solution,” said IBEW 9th District International Vice President John O’Rourke. “All we’re asking for is to extend the plant’s lease through 2024-25, which would give us the opportunity to step back and refocus our efforts on what is needed … because 2,240 megawatts of baseload power generation, well, you just don’t create that overnight. We need a thoughtful, well-planned system to bring on new megawatts of generation.”

Kevin Garduno, an operator at Diablo Canyon who recently became the head of the union’s campaign to keep the plant open, took a moment to address the safety concerns that some members of the public have when they think about nuclear power. 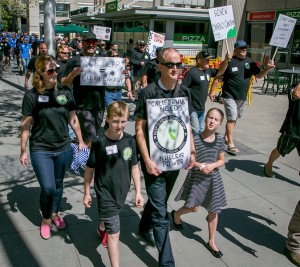 DCPP employee Adam Lyman with his wife and children, James and Anna

“I never have even one second of hesitation when I’m driving into the plant, because I know my brothers and sisters at Diablo Canyon are the best operators in the nation,” Garduno said. “They keep us safe every single day. They follow all the precautions, policies and procedures that are in place to keep the plant safe, reliable and running at all times.”

Representatives from other local unions also joined the rally. John Mader, president of ESC-IFPTE local 20, which represents 350 engineers and designers that work at Diablo Canyon, as well as the scientists who work at the Environmental Protection Agency (EPA), emphasized the fact that the nation’s top environmental experts are advocating for nuclear power as a clean and safe alternative to dirty fossil fuels.

“This fight isn’t just about union jobs. This fight is about our planet,” said Mader. “If you care about the environment and about taking care of our planet, then you keep this plant open!”

Part of Our Future 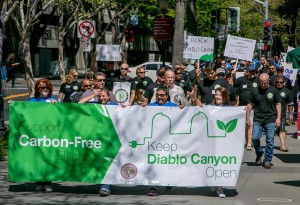 Members and supporters marched through the streets of downtown Sacramento

Although IBEW Local 1245 is not an official member of the State Building and Construction Trades Council, its leader, Robbie Hunter, joined the rally to underscore the plant’s important history as well as its flawless safety record.

“When Enron was playing games back in 2000 [during California’s energy crisis] … it was Diablo Canyon that kept the lights on and kept our industry and economy moving,” said Hunter. “It’s got the most perfect record – not just of a nuclear power plant, but of ANY generation plant in the United States.”

Hunter was not the only notable state leader who spoke at the rally. Several members of the California Legislature also came out to voice their support for Diablo Canyon.

“[Diablo Canyon] is part of our future. It meets all the goals of renewable energy in our state, and it’s also part of our water infrastructure,” said Assemblymember Devon Mathis (R- Visalia). “I’m going to do everything in my power to keep you guys open and keep you working.” 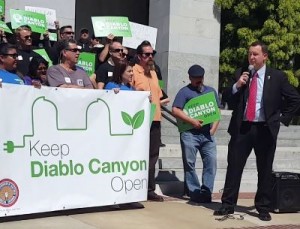 “Thank you so much for being out here, fighting and making a statement at the state Capitol … I’m proud to stand with you,” Assemblymember Adam Gray (D- Merced) told the crowd of supporters. “California needs clean energy and green jobs, and we’ve got both here [at Diablo Canyon]. We should be talking about building more, not taking away what we’ve got.”

This summer, the State Lands Commission will decide whether or not to renew PG&E’s current license that allows Diablo Canyon to remain in operation, and Local 1245 intends to continue speaking out and lobbying the members of the Commission to make sure they understand the critical role that Diablo Canyon plays in both our economy and well as our clean energy future.

Learn more and get involved at www.keepdiablocanyonopen.com.