The Utility Reporter talked with IBEW 1245 member Thomas Mora, a veteran who completed PG&E’s PowerPathway program and now has a career he loves and a brotherhood he can’t imagine life without. Below, Mora shares his personal story, his experience finding a career at the PG&E call center in Fresno, and what motivated him to become more involved with the union as an Organizing Steward in 2019.

Tell us about your military service.

I was in the Marine Corps from 2002-2006, stationed in Camp Lejeune in North Carolina, and I served two tours of duty in Iraq. My Marine Expeditionary Unit was part of the takeover of Falluja.


Because of events that happened during my tour of duty, I received a combat meritorious promotion to Corporal. It usually takes two to three years, but I got it after about a year and half. I was immediately in a supervisory role, in charge of a truck of Marines. I was 19 years old, right out of high school.

What did you do, career-wise, after you left the Marines?

I always thought I would be in the Marine Corps for 20 years, but after two deployments, I decided to come out. Coming back was tough. It was a hard adjustment and took a lot of help from my family.

I went home to Fresno at 22 years old and decided to go back to school. It helped being around people my own age, but it was hard not having some of the power and responsibility.

I went on to work for Bank of America doing customer service for three years, and then to a payroll company.

How has your PowerPathway experience impacted your career?

I first heard about the PowerPathway program from my friend Nes who is also a veteran. We worked together and he told me the program was planning a class for veterans only, and that PG&E and IBEW 1245 were committed to bringing 18 veterans into the company.

I joined the PowerPathway program and my life changed. I learned a lot about the company and traveled to places like San Bruno and Bishop Ranch that are very important to understand. Then I went into customer service training in Fresno.

Being with a class of veterans felt like being back home. There is something about the camaraderie and the way you can talk to each other. We all got along well, and I formed some really close friendships.

Why do you think veterans make such excellent employees?

For one, veterans take orders well. On top of that, we understand what being on time is. Being in the military, everything is about time and doing things on time. We have a saying, on times means being 15 minutes prior to 15 minutes prior.

Veterans also have strong work ethic. A lot of military people are really driven, driven to make change. I’m involved with five groups at work. One is a veterans’ resource group. We just had meeting about the three families we adopted for Christmas. I like making change, and I like helping veterans.

How did your service prepare you for your day-to-day?

My military background certainly helps me in my day-to-day work in the customer service center. I’m able to get yelled at by a customer and won’t even flinch. And then I tell them exactly what needs to be done to help with their projects. Every single day is unpredictable. It’s never going to be the same call, but you figure it out as you go. My military experience prepared me for this — how to take in a lot of information, process it immediately, and figure out what needs to be done.

Tell me about your experience working to pass union-backed legislation. 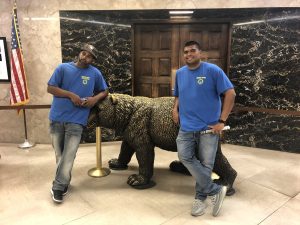 I went to Sacramento this summer in support of SB 901, important legislation related to California wildfire recovery. It was a good experience seeing the union together on this issue. About 100 of us descended on the Capitol in full force, with members on all four stories. We went to every legislator’s office and gave them a breakdown of how this change would help us as employees and union workers and would help fire victims. We gave our opinion whether they liked it or not. I stayed up until midnight watching for the outcome that night, and it passed!

What was it like working on getting out the vote during the 2018 election?

It was my first time canvassing, and it was an eye-opening experience. We worked with four or five different organizations, including the IBEW Local and other organizations, and our teams hit the streets hard to help get out the vote. I worked with [organizing steward] Kurene Turner to manage a team of volunteers. We made sure doors were getting knocked, would go to houses with volunteers, and answered any questions. It was a good experience and I learned a lot. And I’m pretty proud, our candidate was down by about 2,000 votes based off mail-in ballots — and she ended up winning!

How has having a union job changed your life?

I’m big in the union. I had never been in any type of union prior to IBEW 1245 and my family isn’t union, so I really didn’t know how they help workers. All I ever heard was that you have to pay dues and it never made sense to me. After attending meetings and finding out everything the union does for workers, it’s amazing. It’s changed my life, and I could never leave.

Who inspired you to get more active in the union, and what are you most looking forward to as an organizing steward?

The two people who really inspired me to get more active in the union were Ashley Finley and Joe Sanchez, who is also a Marine Corps veteran. Joe asked me every day for a month if I was going to the next union meeting. Ashley is an organizing lead and she was also really persistent in keeping me updated and involved.

I’m really looking forward to getting the word out. I’m always ready to hit the street. Whatever needs to happen, I’ll make it happen and I’ll help get the word out.

Tell us a little more about yourself. What do you like to do in your free time?

I live in Fresno and enjoy spending time with my girlfriend, my dog, and my five nephews and three nieces. Go Lakers!