Largest State Fed in the Nation Throws it Weight Behind 48,000 Academic Workers at UC; Strike Expected to Begin Today

SACRAMENTO, CA – With one of the largest strikes in decades beginning today, the California Labor Federation has granted statewide strike sanction for the UAW members on their Unfair Labor Practice strike. 48,000 academic workers at the University of California voted to authorize a strike but have continued negotiations in hopes of reaching an agreement. At issue is the steep cost of housing, low wages, and disparities over tuition rates that make it hard for these workers who provide so much of the instruction at the UC system to make ends meet. As no agreement was reached, the strike started this morning.

With the granting of official strike sanction, the UAW now has the support of all 1200 affiliate unions and 2 million members that belong to the California Labor Federation. All unions at the UC supported this action, including the State Building and Construction Trades Council. In addition, the Teamsters Joint Councils 7 and 42 have also issued strike sanction so their members can honor picket lines.

“California Labor is united. We stand alongside the dedicated academic workers who are so critical to the teaching and learning environment at the UC. It is outrageous that these workers make poverty wages at some of the wealthiest institutions in our state.” Lorena Gonzalez Fletcher, Executive Secretary Treasurer said, “We call on the University of California to do the right thing and agree to a fair contract and we will be out on the picket lines until that happens.” 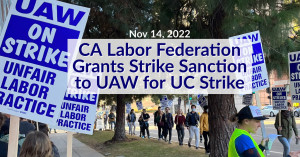