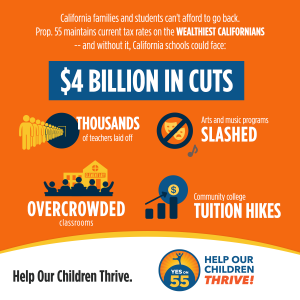 California’s comeback from the brink of financial ruin during the Great Recession is one of the greatest success stories in a generation. While states like Kansas and Wisconsin responded to budgetary uncertainty by cutting education funding with disastrous results, California voters took a different approach, enacting Prop 30 in 2012 to boost school funding to shrink class sizes, hire teachers, bolster community colleges and fund children’s health care.

As a result of voters’ decision to ask the wealthiest Californians to pay their fair share for our state’s recovery, California kids began to thrive again. But now, that success is once again in jeopardy. In response, voters have the opportunity to stave off $4 billion in cuts to schools by passing Prop 55, which would continue the existing tax on the wealthy to ensure California’s education system doesn’t take a giant step backwards.

Last week, investigative journalists at Capital and Main ran a series of stories on how Prop 30 contributed to California’s comeback. The key takeaway is that Prop 30 stabilized California’s budget, allowing for a cascading effect across programs that allowed for the state to get back on track.

The ballot measure rescued California’s public education system and temporarily secured its future by imposing a tax on the wealthy, while slightly boosting the state sales tax. Moreover, by saving our schools, Prop. 30 also gave a reprieve to other California agencies, including those whose services provide health care and relieve overcrowding in prisons. Because public education is constitutionally guaranteed to draw funds from other state agencies in times of financial crisis, low-income adults suddenly found themselves without Denti-Cal coverage during the Great Recession, while single adults were frozen out of Medi-Cal protection. By replenishing public education coffers, Prop. 30 took the pressure off these and other programs benefiting California’s children and low-income residents – and even provided a surplus for the state’s rainy day fund.

Prop 55 is a straightforward, common-sense proposal that ensures California doesn’t return to the days of mass teacher layoffs, exploding class sizes and cuts to important programs like art and music. It also allows for continued budget stability so that we can fund things like children’s healthcare. Prop 55 simply extends the current tax rate on the wealthiest Californians (those individuals earning over $250,000 per year and couples earning $500,000 per year). It doesn’t raise taxes on anyone. The quarter-cent sales tax that was part of Prop 30 will no longer be in effect, giving a tax boost to the middle-class and the working poor.

Most importantly, Prop 55 generates up to $8 billion annually that goes directly to local schools and health care and includes strict accountability measures to ensure the funds are spent as intended.

This is the first installment of California Labor’s Top Props, a blog series on priority propositions for working Californians. Click here to see other posts in the series.