The Four-Year Contract Will Cover More than 3,000 Area Officers

Silicon Valley – This Saturday, security officers–including those who protect tech giants like Google and Facebook—ratified their hard-fought first union contract that will cover 3,000 area guards. 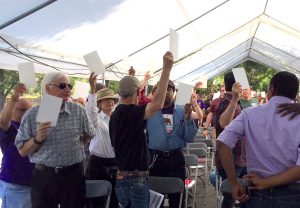 Despite Silicon Valley’s booming local economy, many area officers are struggling to get by on what they were paid. With this new contract, officers will see immediate wage increases, with total increases up to $1.20 per hour by January. Officers won improved healthcare that will be 75%-85% paid by the employer by the end of the 4-year contract for the majority. In addition, many officers will receive new vacation days, holidays and an increase in paid sick days.

“We began this organizing effort because security officers in Silicon Valley are really struggling–some of us are homeless and many of us are living on the edge, and we are working more than 40 hours a week,” said Annabelle, a Silicon Valley security officer and a member on the officers’ bargaining committee. “We have made great strides for officers, but there is still a lot of work to do. Silicon Valley is one of the wealthiest places in the world, and the most expensive. We need to keep fighting to improve our situation so that we can live life with some safety and dignity.”

This huge win adds to the growing number of service workers on tech campuses who have formed their union and made important workplace improvements. The service-workers movement began in the 1990s with the Justice for Janitors campaign. Today, USWW has joined in coalition with labor, faith leadership, community-based organizations and workers – including shuttle bus drivers and cafeteria workers serving the tech industry – to help lead Silicon Valley Rising, a campaign to inspire the tech industry to build an inclusive middle class in this region. Security officers are now the largest single group of service workers to join this movement.