Workers at the Tesla factory in Fremont are standing together to have a much-needed voice in their workplace. They want to join a union.

Several Tesla workers in February began to speak publicly about injuries and organizing a union. Last month, a group wrote an open letter to the Tesla board of directors asking for more emphasis on worker safety.

“One of the most serious issues concerns our health and safety,” the workers wrote. “Accidents happen every day. Severe incidents frequently impact morale and cause delays in production.”

Working people standing together in their unions have won major victories for workplace safety over the decades. The Occupational Safety and Health Act (OSHA) exists to help all working people thanks to unions fighting for its passage  in 1970. A union contract can provide guidance on how management and workers can come to the table to negotiate issues in the workplace. It makes sense why Tesla workers are seeking to join a union now. 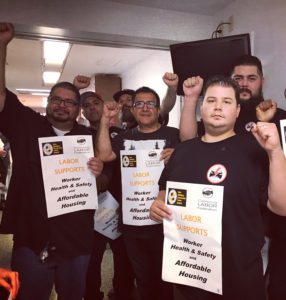 Some of those workers joined a Worker Health and Safety Lobby Day this week at the State Capitol. The package of bills they advocated for in meetings with legislators will help working people across the state including:

This was Mark Vasquez’ first Lobby Day experience. When asked why he wanted to join the Lobby Day he said:

“When I heard about the Lobby Day I thought, I’m going to do it- I’m going to get involved and do as much as I can to help bring safety to workplaces like mine. It was good to be able to have one-on-one conversations with legislators today to let them know about our experiences at Tesla. My dad was a union member when the plant used to be NUMMI and he used to tell me the union is the voice of the workers. I want to come back to the Capitol and be ready for even more conversations with legislators”

Ensuring the workers like Mark can come home safe from work should be a top priority for California Legislators as well as Musk. Workers who pour everything they have into building the new Model 3s deserve to have a voice on the job. That’s a sure path to a safer workplace at Tesla and should be Musk’s top concern as he prepares for “production hell.”