When armies are under attack, each and every soldier must be ready and willing to fight back.

Right now, the workers’ army – the union – is under attack. But instead of tanks and bombs, our opponents are coming at us with a heavy-duty legal weapon known as Janus vs. AFSCME, a U.S. Supreme Court case that threatens to eliminate unions’ ability to collect fair share fees in the public sector. If the court sides with the plaintiff this spring, the end result will be “Right to Work” style workplaces for civil servants in all 50 states. And once the powerful, moneyed interests behind Janus win this battle, they’re sure to set their sights on the private sector unions as well, dead set on leaving millions of union members as collateral damage on our nation’s economic battlefield.

With the life of organized labor on the line, union soldiers everywhere are heeding the call to arms. Their weapon of choice? One-on-one conversations with their co-workers, friends and neighbors to help spread the word about the critical importance of keeping the union strong, and motivate others to take action as well.

To prepare themselves for the front lines, a powerful battalion of 131 IBEW 1245 member-leaders came together at Weakley Hall on Feb. 24 for “basic training,” led by renowned political economist, author and University of Oregon Professor Gordon Lafer. Lafer has been fighting for workers’ rights and quality jobs since the 90s, as an academic, union advocate and congressional policy advisor. He is widely considered to be one of the most compelling pro-union thought leaders of our time.

“Unions all over the country are trying to figure out how to respond to Janus effectively, and it obviously has to be by getting lots of members involved, educated, and feeling like can explain this in a common-sense way to other people,” said Lafer. “Just look at the number of people who are in this room, who are active, who are *not* being paid to be here… that’s really the greatest tool we have to fight back.”

For Sacramento Municipal Utility District (SMUD) Lineman Justin Hirschi, the issue hits close to home. As one of more than 2,500 public sector members of Local 1245, he recognizes exactly what’s at stake, and has been actively spreading the word about ‘Right to Work’ and Janus for quite some time as a member of the Local 1245 Volunteer Organizing Committee (VOC) at SMUD.

“This issue threatens all of our families and all of our livelihoods,” he said. “If that’s not worth standing up for, I don’t know what is.”

The Point of the Spear

The training had two main focuses – providing the members with information, history and context regarding the threats against us, and giving them the opportunity to come up with personal and unique ways to articulate the union difference to others.

From the moment the members filed into the room, it was clear that this would not be a “business as usual” training. The energy level was off the charts, with so much excitement in the room that it could be felt from down the street. The 131 members that had given up their Saturday to attend the event were brimming with enthusiasm.

Before they got down to brass tacks, the union’s fearless general, Business Manager Tom Dalzell, stopped in to offer words of appreciation and inspiration.

“A union is not just an avenue for filing grievances.  A union is 20,000 working people standing together to make all of our lives better,” Dalzell told the crowded room. “This is YOUR union.  You are a source of power that we have never had before, and we could never [embark on this fight] without you.”

Lafer then kicked off the training with an extensive, in-depth and engaging look at the attacks on labor, both past and present, and the extremely powerful organizations that have bankrolled them. His presentation was broken up into sections, and after each section, the members got to do some hands-on practice by brainstorming unique and compelling ways to explain ‘Right to Work and the possible effects of the Janus case, and addressing some of the tough questions they’re likely to encounter when talking to their co-workers about this issue.

The members — particularly those who are relatively new to union activism — blew expectations out of the water with their responses. 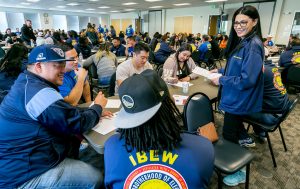 “Imagine that we all go out to eat at the restaurant. Everyone has drinks, dinner and dessert… but at the end of the meal, some people decide that they aren’t going to pay. That’s pretty much what ‘Right to Work’ is.” – Joseph Stewart, PG&E

“The union is the point of the spear. It’s there to make sure you and your brothers and sisters are represented and can take care of their families.” –Jeff Gilbertson, SMUD

“[Without the union] management would abuse power, create a hostile environment, and divide and conquer us.” – Trent Twisselman, Trayer Engineering

“Think of it like internet service. When Verizon develops a higher-speed option, all the other companies try to go faster too. That’s how it is with the union — it makes wages go up, and so other employers have to follow. A rising tide lifts all ships.” –Justin Hirschi, SMUD 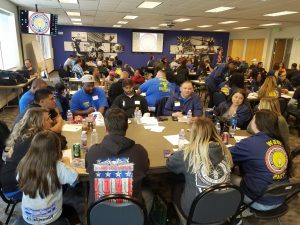 As they went around the room, sharing their ideas and clever analogies, the other attendees listened with rapt attention, jotting down notes and taking in all of the interesting new ways to present this critical issue to their colleagues and friends. At the end of the training, every single member in the room walked out the doors of the union hall ready and willing to spread the word and motivate their co-workers to join this growing movement of active and energized union members.

“The meeting lit a fire in me that I intend to pass on,” said PG&E employee Cindy Rodriguez.

“I had such a good time! I couldn’t wait to talk about what I learned!” Megan Franco, also of PG&E, remarked after the training. “I loved sharing how we would talk to another co-worker, it gave me so many ways to get the point across.”

“This meeting was so informative, but most of all inspiring,” said NV Energy retiree Jim Lappin.

“Few unions have really done what you all are doing here successfully,” Lafer concluded towards the end of the training. “I know [IBEW 1245’s] work isn’t done, but you guys are doing it in a way that’s impressive. I wish more unions could be here and steal your model.”