The San Diego Nine picked the perfect week for a hunger strike.  They may not have known it, but the ghosts of Memphis were haunting the Mission Valley Hilton.  What’s the connection?

Last week was the 45th anniversary of the assassination of Dr. Martin Luther King Jr., who was murdered in Memphis where he had gone to support striking sanitation workers.  As I noted in my column for Martin Luther King Jr.’s birthday in January, the real MLK is frequently neglected in favor of a distorted picture of a vanilla saint who just wanted us all to get along.  Nothing could be further from the truth.

Indeed, King was a provocateur who wanted to disturb us about America’s hypocritical racial inequality AND its shameful class divide.  King died fighting for the rights of poor workers of color because he thought nothing was a better example of what he wanted the Poor People’s Campaign to be than the sanitation workers’ strike.  Their fight was a call not just for legal civil rights for black people, but a cry for economic justice for all.

What King envisioned, then, was a multiracial movement of the poor bent on questioning an economic system that creates beggars in the marketplace–and unions were a central part of his vision.  Long before he went to Memphis, King spoke eloquently about the significance of labor, telling an audience of unionists in 1965:

The labor movement was the principal force that transformed misery and despair into hope and progress. Out of its bold struggles, economic and social reform gave birth to unemployment insurance, old-age pensions, government relief for the destitute and, above all, new wage levels that meant not mere survival but a tolerable life. The captains of industry did not lead this transformation; they resisted it until they were overcome. When in the thirties the wave of union organization crested over the nation, it carried to secure shores not only itself but the whole society.

King also had a profound understanding of how labor rights and civil rights were fundamentally interrelated.  Speaking on the subject of what lesson the history of American labor held for the Civil Rights movement he noted that:

Negroes in the United States read the history of labor and find it mirrors their own experience. We are confronted by powerful forces telling us to rely on the goodwill and understanding of those who profit by exploiting us. They deplore our discontent, they resent our will to organize, so that we may guarantee that humanity will prevail and equality will be exacted. They are shocked that action organizations, sit-ins, civil disobedience and protests are becoming our everyday tools, just as strikes, demonstrations and union organization became yours to insure that bargaining power genuinely existed on both sides of the table.

Negroes are almost entirely a working people…. Our needs are identical with labor’s needs: decent wages, fair working conditions, livable housing, old-age security, health and welfare measures, conditions in which families can grow, have education for their children and respect in the community. That is why Negroes support labor’s demands and fight laws which curb labor. That is why the labor-hater and labor-baiter is virtually always a twin-headed creature, spewing anti-Negro epithets from one mouth and anti-labor propaganda from the other mouth.

So it was forty years ago, so it is today.  Indeed, the gap between the rich and the poor is larger than it has been in a hundred years, unions are on the decline, and people of color are paying the price of the “new normal” of economy scarcity more than whites. 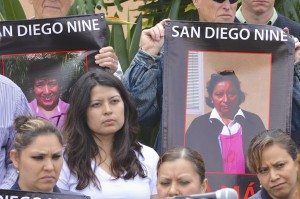 It is a grim picture, but here in our city, the San Diego Nine are standing up against the odds just as the sanitation workers did in Memphis. The workers at the Mission Valley Hilton have been struggling to unionize for several years and when the hotel was recently sold they engaged in direct action to stave off a wave of firings only to have the same workers put through E-Verify, an immigration check, by the new owners who have chosen to use the documentation issue as a bludgeon for union-busting.  What better way to discipline immigrant workers with the courage to organize and spread fear in the ranks at the same time?

Why are the workers trying to organize?  They barely make a minimum wage and have to pay a huge chunk of their income for their family health insurance plan.  They want to have a voice in their workplace and basic dignity on the job.  And despite all the bluster coming from the big hoteliers during the recent TMD debate, the truth is that San Diego’s tourism industry is largely a low wage affair.

Let’s be clear: big business has always been perfectly happy to hire undocumented workers as long as they were easily exploitable and cheap.  It’s only when they speak up that it becomes an issue. That’s the hard truth beneath our happy postcard self image here in San Diego.

Hence the struggle of these immigrant workers is part of a much larger struggle over what the future of San Diego’s and America’s workplace will be.  Will workers, particularly low-wage workers, have the ability to organize and improve their lot or are we moving into a new era of diminished expectations and pervasive exploitation?

Those who King called the “labor-baiters” are on the rise everywhere and at the Hilton it’s clear they still aren’t above using a person’s immigration status in the same way that King’s adversaries used race to fight their workers.  But if we care about a San Diego where workers can make a living wage and “transform misery and despair into hope and progress” then we should support the San Diego Nine, support unions, and strive to change the narrative about economics in our city from one that always focuses on the owners’ story rather than that of the workers’.

This article originally appeared in the San Diego Free Press.