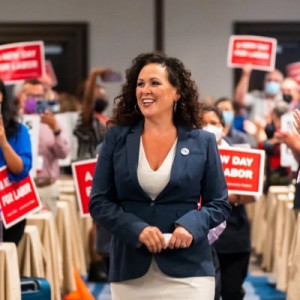 With victory this week in the Georgia runoff, Americans who value democracy, truth and progress can finally celebrate. All year, we were told a red wave was imminent and democracy was on life support. When all is said and done, election deniers running for Governor and Secretary of State were almost universally rejected, Democrats gained an actual majority in the Senate and Republicans will win the House by just a handful of races. Pro-worker majorities were elected in the Michigan and Pennsylvania statehouses and a workers rights initiative won in Illinois. It’s a far cry from the predictions.

Sure there is so much credit to go around. Young people voting in record numbers, demanding a voice in their future. Latino voters who made up the margin of victory in so many races. President Biden’s efforts to build a more fair economy through student debt relief, infrastructure and “Made in America” policies.

But when we feel grateful to wake up in what feels like a better America than we expected, the faces that should come to mind are the 1,200 hotel workers of UNITE HERE who blanketed the battle ground states with the best organizers we have. In Pennsylvania, Arizona, Nevada and Georgia, dedicated hospitality workers were once again on the front lines. Not only did they save democracy, they embodied it.

Democracy is not just about voting. It’s about having a say in the conditions that shape your life. Union workers get to bargain across the table from their employers as equals. They elect their leaders and vote on their contracts. While imperfect, unions bring democracy to the workplace in a way workers feel everyday.

Unions also provide a way for members to engage in politics that is uniquely empowering. Alone, we can never outnumber or outspend our opposition. United with our coworkers, we can outwork the corporations and we can connect with voters in a way that transforms us all. That exactly what happened in these swing states. Workers who have been inspired through their unions brought that energy to the doors, reminding voters that the future will be the one we create together.

UNITE HERE ran one of the biggest GOTV operations in the country but they were joined in every state by so many union brothers and sisters who knew what was at stake. In Nevada, Culinary Workers 226 had support from the Operating Engineers, who played a pivotal role in re-electing the only Latina in the Senate. In Pennsylvania, John Fetterman won strong support from across the movement for highlighting Labor struggles throughout his campaign and Labor carried him in every part of that state. In Michigan, the United Auto Workers were the backbone of the efforts that won a Democratic trifecta and swept all statewide offices. California unions not only hit battleground states but elected true labor champions here at home.

Without a doubt, unions were essential to saving our democracy. The question now is what will they get in return? Most workers have had little experience with democracy on the job. They can be fired at any time for any reason. Corporations spend millions on union busters to threaten workers for trying to unionize. When workers vote for the union, far too many companies close stores or refuse to bargain in good faith. For most workers, the workplace is a dictatorship and efforts to democratize are met with repression.

I am hopeful that’s about to change. With this recent victory for democracy coming from the hands of working people, it is long overdue that we ensure workers see the benefits of democracy in their everyday lives. A debt is owed to the hotel workers, construction workers, public service workers who put themselves on the frontline. It’s time to do right by the people who make this country run.

What does that look like? Easy. Allow more workers to join unions free from fear and retaliation. Crack down on exploitative labor practices like misclassification that push down wages and deny safety protections. Prioritize labor standards in public spending, including protecting public services from reckless contracting out. Stand up to the forces that want to treat workers as disposable, the tech companies that want to make us all app workers with no rights, the union busters that want to scare us into compliance.

Today we celebrate the beautiful possibility of true democracy in our nation made possible by the hard work and sacrifice of the working class. Let’s dedicate ourselves to building the world these workers deserve, where one job is enough and every family can put food on the table and maybe even enjoy it together. That’s the real promise of democracy: life, liberty, and the pursuit of happiness. Or as the labor movement says “8 hours for work, 8 hours for rest, 8 hours for what we will.” We defeated autocracy at the ballot box, now let’s defeat it at the coffee shop and the warehouse down the street. We owe the workers of this country nothing less.