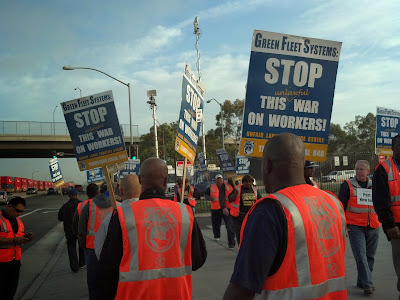 The latest wave of low-wage worker strikes is upon us, and it begins today with Teamster-supported port drivers who haul goods for Walmart at the Port of Los Angeles. At 5 a.m., port drivers took up “Stop this unlawful war on workers signs” and hit the picket lines in a surprise short strike. Teamsters are marching in solidarity with the drivers.

Local television, print and radio crews came out to cover the job action (check out news coverage here). The advisory informs us port truck drivers at three companies are walking off the job for 36 hours to protest Unfair Labor Practices, including harassment, intimidation, and other violations of Federal labor laws. According to advisory:

Striking drivers at two of the companies – Green Fleet Systemsand American Logistics International – are bona fide employees of these trucking companies. Region 21 of the National Labor Relations Board has received charges detailing unlawful retaliations against the drivers at these two companies in their efforts to organize a Union with the International Brotherhood of Teamsters.

Pac 9 Transportation misclassifies their full-time, exclusive drivers as “independent contractors.” Those drivers are demanding recognition as employees and have suffered harassment and intimidation from Pac 9 in their efforts. Charges for unlawful retaliation are pending before Region 21 of the National Labor Relations Board. This is the first time in decades that port truck drivers classified as “independent contractors” have gone on strike. Their efforts are significantly bolstered by the fact that more than 50 Pac 9 drivers, and hundreds of others have filed claims for wage theft with the California Labor Commissioner.

Josh Eidelson at Salon wrote a terrific story about the strike, titled, “Truckers who haul for Wal-Mart and Forever 21 plan surprise strikes today.” The subhed is even better: “Hundreds of workers will defy vengeful companies and laws that deny they're even employees.” Eidelson writes,

In labor’s latest challenge to a low-wage economy and a legal system that excludes huge swathes of the workforce, hundreds of non-union Port of Los Angeles truck drivers plan to stage surprise strikes against three companies Monday. The workers transport goods from the port to companies including Costco, Forever 21, Sketchers and Wal-Mart. They allege their companies — Green Fleet Systems, American Logistics International, and Pac 9 — illegally punished workers for organizing and exposing wrongdoing. While drivers striking at GFS and ALI (starting at 5 a.m. PST and 4 p.m. PST respectively) are legally employed by those logistics companies, the workers at the third company, Pac 9, are among the growing ranks of so-called “independent contractors” who legally aren’t employed by anyone at all. They plan to walk (or drive) off the job at 5 p.m. PST Monday.

“I’m demanding what a worker deserves,” Pac 9 driver Jose Galindo told Salon in Spanish in a pre-strike interview. Wal-Mart, Sketchers, Costco, Forever 21, GFS, ALI and Pac 9 did not provide comment on the workers’ allegations in response to Friday inquiries (Pac 9 referred Salon to a communications firm, which did not respond to a Friday request for comment).

The port truckers, backed by the Teamsters union, are the latest to take up tactics that have characterized a wave of low-wage, non-union strikes since 2012. Like strikes targeting the Wal-Mart supply chain and the fast food industry (also significantly supported by affiliates of the same union federation, Change to Win), the truckers are mounting one-day strikes rather than indefinite ones, and framing their protests as a response to illegal retaliation – two tactics with some potential to maximize public scrutiny on bosses while reducing the ever-present risk that the striking workers lose their jobs. And like fast food workers or Wal-Mart warehouse staff, the Pac 9 truckers are facing down a “Who’s the Boss” problem: Subject to the will of one corporation (McDonald’s, Wal-Mart, Pac 9), but legally employed by someone else: a fast food franchisee, a warehouse company or, in the case of Monday night’s strikers, putatively self-employed.