When America is at war, much changes in our internal relations, especially our race relations and the status of women. World War II was no exception. The U.S. had a problem. To maximize the ability to fight and win the war effort, the U.S. had to mobilize all the human energy it could.

But wait — that's not quite true. Just a few years prior to the Imperial Japanese military’s attach on Pearl Harbor in December 1941, the U.S. deported over half a million Mexican Americans and Mexican nationals. The roundup of Mexican people in the U.S. in the mid 1930’s, known as the Great Repatriation, was probably the largest single deportation of residents in U.S. history. The numbers vary but the most accurate estimate is 500,000.

Immediately after the attack on Pearl Harbor and America’s declaration of war, the U.S. interned over 110,000 Japanese nationals and Japanese American citizens and held them in internment camps for the duration of the war. Most of the Japanese interned were employed in agriculture along the Pacific coast, primarily in California. Interestingly, the Japanese living in the Hawaiian Islands were not interned during the war. Why was that? A reading of Carey McWilliams' Factories In the Fields (1939) and Colleen Finnegan’s Internment for Profit (1986) leads one to conclude that the white farmers and their organizations saw a possibility of seizing land being farmed by Japanese farmers and used the Japanese government’s attach on Pearl Harbor as an excuse to have Japanese people moved out. 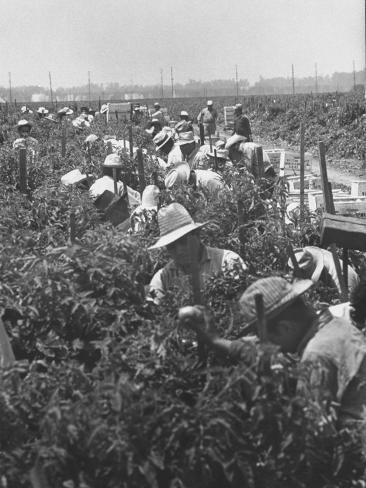 In 1942, west coast Japanese were sent to camps in the interior of the U.S. Simultaneously, the U.S. government began negotiations with Mexico to bring north large armies of male workers — Braceros — to harvest the crops and build and repair the railroads across the country. The Bracero Program was instituted between the U.S. and Mexican governments after Mexico declared war on the Axis powers in June 1942 and entered WWII as an ally of the United States. During the war, approximately 125,000 Braceros came north to help in the fight against fascism. During the war years 16 million men and women enlisted and were inducted into the armed services, most sent overseas to fight. Tens of thousands went to work in defense plants. In California, this primarily meant shipyards where many African Americans, women (Rosie the Riveter) and former dust bowl refugees found non-agricultural employment for the war years.

There was a tremendous need for workers to fill the vacancies in agricultural. But this was not a perfect situation for the men in the fields and along the railroad tracks. A percent of each man’s pay was withheld and deposited in an account for each worker. Not surprisingly, much of the millions put aside as a savings for each man disappeared after the war. Abuses were common. More on that later.

1945 was a good year at on the home front. At peace, America’s labor unions were demanding full employment in a peacetime economy. As a percent of nonagricultural employment, union membership peaked at 35.4% in 1945. It’s highest ever. Many assumed the Bracero Program would come to an end now that the war was over. But western growers pressured Congress for an extension. And, extended it was, until 1964. By then, there were 4,000,000 Bracero total border crossings. A border crossing indicates one worker crossing the border one time. In part two, we’ll look at the history of the braceros after WWII until the program’s abolition after a tragic and disastrous farmworker bus crash in Chualar, south of Salinas, in September 1963.

On Saturday, September 14th, please join us for the Bracero Memorial Highway Project Dedication and Exhibit, sponsored by the Monterey Bay Central Labor Council. The event will run from 3:00-7:00 pm at the National Steinbeck Center (1 Main Street, Salinas), and food & beverage will be provided. Contact Juan Martinez of the Bracero memorial Highway Project at 831-794-0006/qvolejuan@gmail.com for more information. Donations can be sent to Monterey Bay Central Labor Council 931 E. Market St., Salinas 93905