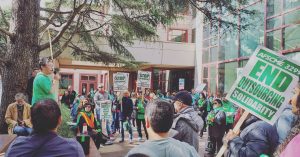 AFSCME Local 3299 began a three-day strike today at campuses and medical centers across the state, fighting for fair wages, an end to outsourcing and equal treatment for patient care workers at the University of California (UC). For months, workers have demanded fair treatment for women, minorities and immigrant workers, yet UC continues to exacerbate inequality by outsourcing jobs, making health care more expensive and failing to pay livable wages.. AFSCME Local 3299’s 15,000+ Patient Care Technical workers on strike are joined by AFSCME 3299’s 9,000+ Service workers and the University Professional and Technical Employees (UPTE-CWA), with their 15,000 members, on the picket line. In addition, the California Labor Federation and many other unions are joining the line in solidarity.

This is the second strike AFSCME 3299 has authorized against the UC this year. Members and allies held a strike in May on the inequality workers were experiencing. Still, the institution continues to deny workers’ dignity and respect by avoiding bargaining in good faith, leading to further exploitation of its lowest-paid workers. The UC’s current proposal will raise health care premiums by as much as 61%, outsource jobs, lift the retirement age, and flatten wages for several years. Despite the concerns voiced from workers, the UC has begun to impose these unjust terms.

In San Francisco today, a large and loud crowd gathered on UCSF’s medical campus to push back against the unfair pay and biased practices placed upon working people and their families. Unions, workers and allies alike stood together to reject the UC’s unfair agenda. During the rally at the UCSF Parnassus campus, an AFSCME local 3299 member exclaimed:

“We’re not just fighting for living wages. We’re also fighting for better working conditions, a good quality life and against the privatization of health services.”

The UC system is the biggest employer in California. UCSF Health CEO Mark Laret makes $1.1 million annually, and just this year UC administrators were given a 3% raise on top of their already  six-figure salaries. In contrast, UC service and health workers are struggling to pay their bills, feed their families and many can no longer afford to live in the cities where they work.

Although authorizing this strike is a last resort for health care workers who want to provide the best patient care they can give, the UC gave workers no other option.

As we’ve seen recently with the Unite Here strikes at Marriott, support for the workers is strong. An array of unions, community groups, and allies came out today to send a clear message to the University of California: Working people at UC  deserve fair pay, quality working conditions and job stability.

That’s a message we can all get behind. Join us in standing in solidarity with AFSCME 3299 this week!.

Visit https://afscme3299.org/strike-announcement-locations/ to join a rally near you!