On October 3, 2015, Governor Brown signed into law Senate Bills 11 and 29. These new laws mandate training for California law enforcement that will give them the skills needed to safely interact with people with mental illness, intellectual disabilities, and substance abuse disorders.

The safety of people with disabilities in our communities is a priority to me as a homecare provider and as the mother of my 17-year-old son, who has autism. My son Manuel is the reason I initially approached the UDW legislative team and proposed the idea for a bill that would train police on the appropriate procedures for interacting with people who have conditions like my son’s. Manuel is also the reason I advocated tirelessly and successfully for the legislation until it was signed into law.

My son speaks very little and is sometimes aggressive. He’s been known to punch, bite, or head-butt if he doesn’t like something. Some days are great, and others not so good. And a tactic to calm him that worked one day, may not work the next.

My son is also a wanderer. In 2013, when he got about a mile away from my home, I became truly concerned for his safety. I remember noticing that a gate that’s always locked was unlatched, and when I went into my house, all of my lights were on, and Manuel was gone.

My husband Gilbert and I immediately convened a search party of neighbors and family members to find Manuel. And we did. When I approached him, he tried to run, but I was able to grab hold of him and get him back home safely. 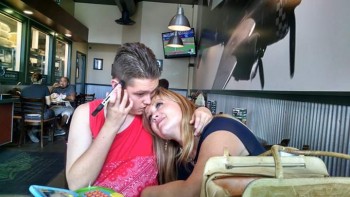 His tendency to run or lash out concerned me. What if while he was wandering off he was approached by a law enforcement officer that didn’t understand his aggression? I began to think about some of the horror stories I’ve heard about people with disabilities and their interactions with police who don’t understand them. I thought of the 22-year-old man with Down syndrome in Florida who was beaten by police and handcuffed, because they mistook the colostomy bag in his waistband for a weapon.

I couldn’t just sit around and hope my son wouldn’t become another tragic news story.

After doing my own research, I approached UDW Executive Director Doug Moore and the UDW legislative team about sponsoring a bill that would keep my son safe if he were to wander again. It was no surprise that our union was eager to help.

I became a partner in the legislative process. We worked together and researched what could be done, and eventually connected with Senator Jim Beall, who was already working on legislation that addressed this issue. UDW signed on to become a sponsor of the bills, and I was given the chance to provide my own feedback on the details of the bills.

I spent a lot of time at the Capitol in Sacramento lobbying legislators and testifying at committee hearings to ensure SB 11 and SB 29 passed. One day I did 26 lobby visits. I wanted to make sure that I connected with legislators and their staff on a personal level to really show them how this issue affects their own loved ones, neighbors, and community members.

SB 11 and SB 29 passed through the Senate and the Assembly with nearly unanimous support from both Democrats and Republicans. The Governor signed the bills into law earlier this month. While it was a long process, it was worth it, because I know that my son and many others throughout the state of California will be safer because of it.

I want my fellow UDW members to know that if there is an issue that affects IHSS, our clients, or our fellow homecare providers, you can reach out to our union. Never in a million years did I think I would play an active role in getting a new law passed, but I did it because it was important to me and because our union stood behind me. Now I know that if I want to make a change, it’s possible because I am not alone – my union is there to help.

Astrid Zuniga is an IHSS provider and Stanislaus District Chair