Our state prisons are dangerously overcrowded, and have been taken over by the federal government. With Washington imploring Californians to come up with a plan for how to reduce our overcrowding problem, a coalition of law enforcement leaders, victims rights groups and Gov. Jerry Brown have crafted Proposition 57. 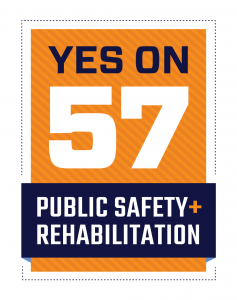 If passed by voters, the measure will keep public safety decisions in the hands of California law enforcement professionals, and avoid the possibility of court-ordered prison releases from federal officials.

Doing nothing is not an option. Our criminal justice code, like our prison system, is broken, with seemingly arbitrary definitions of which crimes are considered violent under the law. Proposition 57 reforms this broken system to give law enforcement professionals more voice in who should stay behind bars and which nonviolent offenders are candidates for rehabilitation.

Proposition 57 will put a new emphasis on rehabilitation for nonviolent offenders and give judges and other public safety professionals more discretion about who should remain locked up. After years of failed criminal justice policy that led to over-incarceration and arbitrary mandatory sentences, Proposition 57 takes a more humane and common sense approach to keeping Californians safe.

Proposition 57 will give judges, not prosecutors, the power to decide whether a juvenile offender should be tried as an adult. Judges are more neutral arbiters than prosecutors, who are typically more aggressive in pushing for convictions and maximum sentences.

This is the next step in California’s evolution toward a more humane criminal justice system. Actions taken by Gov. Brown and lawmakers in recent years, and the passage of Proposition 47 by California voters in 2014 have already set us down a path toward a more common-sense approach to criminal justice and public safety. Proposition 57 will help codify those recent changes, and increase much-needed resources for rehabilitation of nonviolent offenders.

By emphasizing rehabilitation for non-violent offenders, Proposition 57 will enhance public safety, reduce recidivism and save taxpayers hundreds of millions of dollars every year.

Proposition 57 has strong support from Labor Unions and Organizations including:

This is the fourth installment of California Labor’s Top Props, a blog series on priority propositions for working Californians. Click here to see other posts in the series.