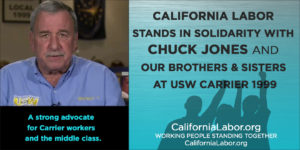 This week, President-elect Donald Trump took to Twitter to attack one of our own – Chuck Jones, President of United Steel Workers Local 1999 in Indiana.

Chuck’s local union represents workers affected by Carrier’s plans to outsource their jobs to Mexico. After Chuck spoke up on behalf of his members and told the truth about the number of jobs that would be saved by the deal struck between Trump and Carrier, Trump took to Twitter. He made a attacked Chuck personally, calling him out by name and he even questioned the role of the union in companies deciding to outsource their jobs. In the aftermath of these outrageous tweets, threats have started to be made against Chuck and his family.

Trump picked the wrong person to target. Chuck Jones has been a passionate and tireless advocate for his members and for the middle class. He has fought every day to keep jobs in Indiana. His leadership is a shining example of what we need more of in this country: conviction, integrity, and grit. He has stayed strong throughout this entire ordeal, focusing more on the folks who are losing their jobs than the harassment coming his way. He does not deserve this.

An attack on Chuck Jones and Local 1999 is an attack on all working people. It’s unacceptable.

The California Labor Federation and the AFL-CIO have put together petitions so folks could send encouraging and supportive messages to Chuck and members of Local 1999. In less than 24 hours, thousands of heartfelt messages have come in from around the country.

Some of the messages we’ve received so far:

“An attack on one of us is an attack on all of us! SOLIDARITY!!!” Miguel Gallegos, member of Teamsters Local 439 in Stockton

“From one union president to another I stand with chuck! Union strong!” Joyce Recar, CSEA in Fremont, CA

“As a teachers’ union member, I know how important the union is to all of us workers, no matter which career. Please know we appreciate what you’re doing, and stand behind you.” –Barbara Foster, Berkeley, CA

“I Stand with Chuck, his family, and his Union No one in this country should have threats made to them and their families for standing up and telling the truth.” Vickie Robbins, California Nurses Association in Azusa, CA

“I am so pleased to have people like Chuck representing the USW. I am very proud of Chuck and the strong voice he provides; a voice that won’t be silenced.” Ari Grayson, Laguna Beach, CA

“Chuck Jones is my kind of leader. He shouldn’t have to point out a deception that an employer took part in, but he didn’t let his members down. He called it out!” Cathi Schafer, Retiree of UFCW Local 1428 in Upland, CA

“I am no longer part of a union, but I still stand with all workers of America. Thank you Chuck for speaking the truth and also for your graciousness toward Mr. Trump, which obviously was not returned.”, Susan Cross, Irvine, CA

“Hearing you tell it straight made me stand up and cheer. Thank you for the courage and clarity, Chuck.” In solidarity, -Beth, Member, AEU. Staff, CSEA.

“Chuck- Bravo! You may not have expected it when you spoke out, but your willingness to stand up to the inevitable retaliation of Trump and speak out against his lies has made you a hero for working Americans. Trump claims to be working for us all, but the Unions protect us from power-hungry tyrants like him… Keep up the good work and may you all stay safe from Trump’s trolls. #ImWithChuck” – Melissa Peters, UNAC/UHCP in El Cajon, CA

“As a union sister to Local 1999, your family, and you Chuck, remember we stand united as one! I support your strength to stand up for the rights of our brothers & sisters. Stay strong.” Lisa Tieso, Teamsters Local 856 in Millbrae, CA

The California Labor Federation is planning on printing out ALL of the messages received supporting Chuck and his local union and mailing them in the coming weeks. There’s still plenty of time to sign- please take a minute to fill out our petition with some encouraging words and we’ll be sure to include them.

These are our union brothers and sisters. Let’s show them the Labor Movement stands with them. Sign the petition for Chuck and Local 1999 today!