Skip to content
<< LABOR'S EDGE BLOG ARTICLES
Betsy DeVos was nominated as secretary of education, and hearings for her nomination are currently underway. As reporters and pundits are examining DeVos’ record, we thought it would be interesting to imagine what it would be like to actually work for DeVos. This is speculative fiction, of course, but based on the things she’s said and done over the years (click on the link after each entry to read more about DeVos and that topic). But here’s what we think it could be like to work for DeVos. 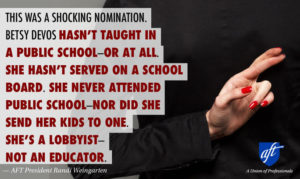