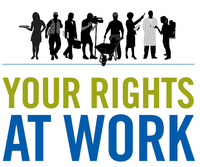 Since Donald Trump won the election, nearly 900 incidents of violence, hate speech and harassment have been reported. In light of these attacks, it’s important that you know what your rights are and what you can do if you or someone you know is the target of one of these attacks in the workplace. Click on the links to learn more about your rights, what constitutes illegal activity and what you can do about it if you are targeted.

Gender Discrimination: No one should be typecast into—or out of—a job or profession because of gender. Gender discrimination involves treating someone (an applicant or employee) unfavorably because of the person’s gender. The law forbids discrimination in all aspects of employment, including hiring, firing, job assignments, layoff, training, fringe benefits and any other term or condition of employment. An employment policy or practice that applies to everyone, irrespective of gender, can be illegal if it has a negative impact on the employment of people of a certain gender and is not job related or necessary to the operation of the business.

Race and Ethnicity: Racial discrimination involves treating someone unfavorably because of the person’s race or personal characteristics associated with race. The law forbids discrimination in any aspect of employment, including hiring, firing, pay and benefits. It is also unlawful to harass a person because of that person’s race. Although an employer may implement a policy that applies to everyone regardless of race or color, the policy can still be unlawful if it has a negative impact on the employment of people of a particular race or color, is not related to the job and necessary to the operation of the business.

The law prohibits discrimination against an employee or applicant because of that individual’s national origin. Whether an employee is Filipino, Turkish, American Indian, Colombian or Ukrainian or any other nationality, he or she is entitled to the same employment opportunities as anyone else. No individuals can be denied equal employment opportunity because of birthplace, ancestry, culture, linguistic characteristics common to a specific ethnic group, or accent.

Religion: Religious freedom is one of the principles on which America was founded and one of the basic rights we value most. Religious discrimination involves treating a person unfavorably because of his or her religious beliefs.

Title VII of the Civil Rights Act of 1964 prohibits employers from discriminating against workers on the basis of religion in hiring and other conditions of employment. The law requires an employer to reasonably accommodate an employee’s religious beliefs or practices, unless doing so would cause an undue hardship on the employer.

Sexual Harassment: Sexual harassment is unwanted verbal or physical conduct of a sexual nature when:

Learn more about your workplace rights in these and other areas.